David Duke gets spotlight with US Senate run, GOP gets scared with alleged Trump link 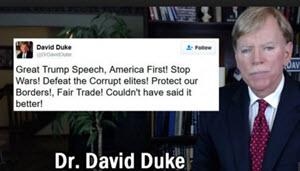 As if the Republican Party didn’t have enough problems at the national and state levels, along comes their own David Duke to run for the U.S. Senate seat in the Bayou State.

Duke, former Grand Wizard of the Ku Klux Klan and America’s most infamous white supremacist, snatched the headlines from the record number of candidates who qualified last week to replace Republican U.S. Sen. David Vitter, who, after losing the governor’s race, is not seeking a third six-year term.
A record 24 candidates are seeking the open seat – nine Republicans, seven Democrats, two Libertarians, and six Other/No Party.  Candidates with a party affiliation had to pony up $900 and unaffiliated candidates had to pay $600 to get their names on the ballot on November 8.
But when the dust settled, who got the most attention from the state and national media?  Of course, it was David Duke, who had hinted about running in the 1st Congressional District against Republican U.S. Rep. Steve Scalise.
However, on the last day of qualifying, he decided to go for the big brass ring – the U.S. Senate seat.  That news sent the media, some of the candidates, and national and state GOP officials into a frenzy.
The GOP was quick to distance itself from Duke, much as it had done when Donald Trump began to wrestle the party away from its establishment.  Trump captured the presidential nomination, but in the process has left the party divided and in disarray nationally.
What affect Duke will have on other Republican candidates in the Senate race remains to be seen.  And his national notoriety could also impact the presidential race since he has embraced Trump.
Roger Villere, chairman of he Louisiana Republican Party said, “The Republican Party opposes in the strongest possible terms, David Duke’s candidacy for any public office.”  But the fact remains, Duke is one of them, claiming that he created the current Republican Party.
Duke said that he was inspired to run by Trump’s acceptance speech, noting that Trump’s ideas are the same as the ones he’s been putting forth for decades.  “I thought, wow, here’s a man embracing the core issues I have fought for my whole life,” Duke said.
He also noted the murder of three Baton Rouge police officers also played a role in his decision to run for the U.S. Senate.  Duke said, “People told me I have a duty to do this.”
He added, “I have been warning about this for a long time.  When it happened, I was shattered.  We’re still grieving, but we also need to develop a righteous anger,” noting he will advocate for true equal rights.
Duke, at age 66, is no longer a spring chicken, but  he remains articulate and a lightning rod in politics throughout the country.  He will be a thorn in the side of the four GOP candidates considered the most viable – U.S. Reps. Charles Boustany and John Fleming, state Treasurer John Kennedy, and retired Col. Rob Maness – especially those running to the political right.
Duke’s last statewide race was for the U.S. Senate in 1996, finishing fourth with 12% of the vote.  In 1999, he ran for the U.S. House in the 1st District and finished third with 19%.
In 2002, Duke was convicted of tax evasion and hasn’t voted since 2000.  However, in May of this year, his voting right was restored.  A felony conviction does not prohibit one from running for federal office.

Donald Trump, GOP US Senate candidate and the revival of David Duke's forces