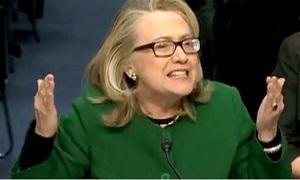 It’s time to sober up from the Democratic National Convention’s giddy posturing and its Khizr Khan love-fest.

But does Khizr Khan hate Pakistani Taliban terrorists as much as he hates Trump?

It’s a question that needs asking.

What grabs headlines is that Khan says he grieves for his dead eldest son, a Pakistan-born American soldier who was blown apart in Afghanistan when he ran towards a suicide bomber.

But did that suicide bomber kill himself, Khizr’s son, and other Americans in the name of the Taliban?

It’s possible– but don’t take my word for it.

Ask Khizr Khan. Chances are he knows a great deal more than he’s revealed on television.

You remember “Al Qaeda.” But do you know the connection between Al Qaeda and Pakistan’s Taliban?

Who can forget the murder of American journalist Daniel Pearl?

Daniel Pearl, naive, trusting and Jewish, went to a Pakistani tea room naively looking for “Al Qaeda” operatives for a journalistic scoop but instead was savagely kidnaped and murdered in 2002 by Khalid Sheikh Mohammed, a Pakistani who says he personally sawed Pearl’s head clean off from his body, and put it all on YouTube.

But we knew about Pakistani Khalid Sheikh Mohammed before he sawed Daniel Pearl’s head off because Khalid claims to be the “mastermind” behind Osama Bin Laden’s 9/11 atrocities. Saudi dupes carried the 9/11 operations out, but the horrific strikes on the World Trade Center using innocent passenger-filled planes as terror weapons were planned in minute detail by Pakistani nationals.

We’re just not thinking about it so much any more.

Al Qaeda, Taliban, terrorism... it all starts to blur together as the years go by.

But the nationalities also blur, and there’s a reason for that: These Pakistani killers like to move around. And especially, they like to move to the West, move to America, get splendid educations at prestigious universities and then use their knowledge to murder Americans.

How can Americans protect themselves?

But look closely at the Khans and Pakistan.

Yet much of Khalid’s life mirrors that of the Khan family. Like Khizr, who reportedly moved to the United Arab Emirates from Pakistan, Khalid’s family moved to Qatar. After completing high school in 1983, Khalid attended college at Chowan University in Murfreesboro, North Carolina. After transferring to North Carolina Agricultural and Technical State University, Khalid received a Bachelor of Science degree in mechanical engineering in 1986.

Then, he started using his very nice education to murder Americans.

Look at many Pakistani terrorists. Does anyone see a pattern yet?

As Khizr Khan likes to lecture all of us non-Muslim Americans, Islam is a wonderful religion and Donald Trump is an ignorant, arrogant idiot for daring to try to halt Muslim immigration even temporarily.

But for all his waving of a pocket copy of the U.S. Constitution, is Khizr Khan himself a Taliban follower? A Taliban sympathizer?

Khizr has certainly never openly disavowed the Pakistani Taliban, nor has his wife.

Khizr may protest that his son died fighting Al Qaeda and the Taliban. But he doesn’t deny that many of the Muslim extremist terrorists targeting Americans for murder and mayhem are Pakistanis. He doesn’t try to explain why.

Hillary Clinton claims that one of her qualifications for becoming America’s commander-in-chief is that she was present in the “war room” when President Barak Obama ordered the Navy Seals to assassinate Osama Bin Laden. But where did the Seals take out the 9/11 Yemeni-Saudi financier?

In a neighborhood ringed by luxury homes belonging to Pakistan’s military.

Pakistan responded to the Seals’ “Zero Dark Thirty” strike not by thanking America for ridding Pakistan of its terrorist menace, but by complaining that the United States had the nerve– the nerve!– to violate its national sovereignty.

It’s time for a closer look.