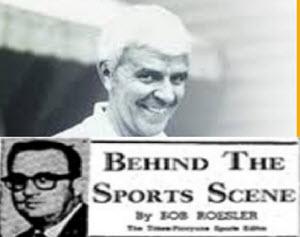 To say that Peter Finney’s long career as a New Orleans writer and sports columnist lasted a lifetime is not an exaggeration. In fact, it lasted 68 years, which, according to the current Gregorian calendar, I achieved on my last birthday. Man, that’s a long time for one person to be doing the same thing, but the tributes that have rolled in since Pete Finney died Saturday morning at age 88, suggest that every day of those 68 years was a day well spent.

As a young sporting writer at the Baltimore Evening Sun, I was familiar with Finney and his work, but I had never met him. I was more friendly with the New Orleans NFL beat guys such as Dave Lagarde and Will Peneguy, but after I moved on to the NFL and then to the Saints I saw Finney’s impact. His face appeared on page 1 of the sports section five days a week, informing, cajoling and advising his readers on the topic of the day. If he had been born a few years earlier, ESPN would have called and asked him to share his enthusiasm and knowledge with a nation of sports maniacs, but Pete would probably have declined. He was a New Orleans guy, born in the French Quarter, educated at Jesuit and Loyola, and probably would have felt uneasy talking about things anywhere else.

Pete Finney was clearly the Babe Ruth of New Orleans sports journalism. But as the Ruthian legend is not complete without a chapter on Lou Gehrig, the Peter Finney story is not complete without a mention of another giant in New Orleans journalism, Bob Roesler. It is hard to think of one without the other, especially if you knew them or were a regular reader of their columns. A review of their columns over the years shows different styles, both directed at informing the fans by giving them a seat on the sidelines, the draft room or in the executive suite.

Roesler was the diplomat or statesman whose writing was aimed at long-term goals and solutions, like how to keep the Superdome as a first-class facility or what impact a Super Bowl would have on New Orleans. Finney, on the other hand, gave fans a daily perspective of their team’s current condition. If the fans wore paper bags on their heads when the Saints did poorly, Finney’s columns sounded like he was wearing a bag when he wrote them. Even when a new administration took over the Saints, as we did in 1986, he was telling his people not to get too excited.

“A good start,” said Finney's lead after new head coach Jim Mora’s first game, a 10-7 preseason victory at Denver. But Finney was not about to jump on the bandwagon yet, as he cautioned a few paragraphs later: “History tells us it’s foolish to get excited over what happens when a team is taking its exhibition cuts.” Indeed, the next season, after a nine-game winning streak and the team’s first playoff appearance seemed to wipe away twenty years of misery, Finney perfectly described the feeling of a long-suffering Who Dat Nation after Minnesota's 44-10 annihilation. “They came to watch the Benson Boogie at a Viking funeral. Instead, what they got was a trip into the past.”

Over the years, I became close to both men’s sons, interestingly enough, independently of their fathers. Pete Jr. was a writer with The Times-Picayune who had a brief fling at the New York Daily News when I was at the NFL office. After I came to the Saints, a member of our medical orthopedic team was Dr. Tim Finney, who still toils on the Sunday sidelines. The third Finney son, Mike, is a golf pro in Louisville who my brother Jerry came to know as an assistant pro at Valhalla, the frequent PGA stop. Mike arranged for Jerry and I to play the private course that once was a dairy farm where our father picked up milk.

I became acquainted with Bob’s son Toby when our children attended St. Dominic School together and since as members of the same monthly Bible, book and beverage club. Toby keeps me posted on his dad, who is not doing so well these days. He and wife Chloe have long moved out of the Lakefront home they rebuilt after Hurricane Katrina, and dementia has slowed him down. But as the tributes rolled in for his colleague this weekend, I couldn’t help but think of Bob and Pete together, as an ink-stained entry that kept New Orleans sports journalism at the top of their profession for a lifetime.