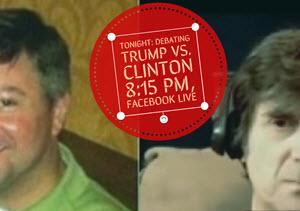 Trump vs. Clinton. Watch and join the discussion tonight.

Might not be as famous as the Carville-Matalin duo, but, some argue it’s certainly just as combative.

Jeff Crouere and Stephen Sabludowsky, two political junkies will be discussing (and arguably, debating) the U.S. Presidential Race—Trump vs. Clinton, tonight (Monday night August 15) on Facebook Live at 8:15 pm.  The discussion can be seen on Sabludowsky’s, Crouere’s and Louisiana Politics Facebook pages.

Topics likely to be discussed: Is Trump causing his own problems as his campaign nosedives or is the media corrupt and biased, resulting in unfair coverage and bad poll numbers?  Can Clinton be trusted given her perpetual scandals and the current email mess and the growing Clinton Foundation flap.  Can Trump rebound and if not, should he cut bait and quit, allowing his VP pick to run in his place?  What is the biggest concern—Clinton’s liberal leanings or her caving into Bernie Sanders voters?  Are the Russians invading the political arena, aiding Trump?  Can Hillary stand up to Putin?

Crouere is a proud member of the Tea Party.  Sabludowsky doesn’t drink tea but consumes his politics in moderation.

They often voice their differences Tuesday mornings on Crouere’s WGSO 990 AM Radio program.

Crouere is an avid Donald Trump supporter, having been one of Trump’s more vocal backers, has been a Trump delegate at the GOP convention.

Sabludowsky is a proud member of the “nevertrump” movement but is no Hillary Clinton fan, at all.

Despite their political differences on these issues, Crouere’s columns have appeared at least twice a week for fifteen years on Bayoubuzz.com and they co-founded and co-produce the very popular Politics With a Punch, which Jeff Crouere hosts and emcees now for over fourteen years.

Facebook Live Watchers can ask questions and chime in.