Donald Trump and the Christian Conservative moral cross to bear 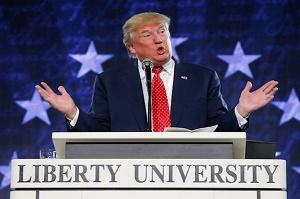 by Dr. Albert Samuels
I have a number of friends who consider themselves to be social conservatives. Because of their self-identification, voting for Hillary Clinton.is out of the question.  They cite a laundry list of reasons:  Some point to her  positions on issues like abortion and same-sex marriage. Others point to questions about her emails, the tragic deaths at Benghazi while she was Secretary of State, and general concerns about her truthfulness. And never far from the surface is the revulsion against her husband, former President Bill Clinton, for his well-documented history of sexual transgressions. All in all, these factors create a portrait of a candidate that many conservative Christians believe lacks the moral character to occupy the office of President of the United States.

I get it. I do not want anyone to interpret anything that I write as an attempt by me to justify or excuse Hillary Clinton’s behavior. Nor do I necessarily impugn the motives of my Christian brothers who identify with the Republican party and/or the conservative movement. Rather, I believe that many of my brothers and sisters approach these issues with good motives.

What concerns me is that many conservative Christians who wouldn’t vote for Hillary Clinton in a million years simultaneously endorse (and sometimes enthusiastically) a candidate like Donald Trump. It is simply difficult to square these two realities. All of the available evidence suggests pretty conclusively that, in the interests of moral consistency, those who insist Hillary Clinton is a morally unacceptable candidate should have at least equal, if not substantially more, trepidations about “going all in” with Donald Trump. On virtually every point where Mr. Trump has criticized Mrs. Clinton and questioned her fitness to be president, not only has he is guilty of the same things but he has done things that are far worse.  In fact, he perfectly embodies the Biblical description of a “hypocrite” as described by Jesus in his denunciation of the Pharisees in Matthew 23.

Time and space will not allow for an exhaustive inventory of Trump’s many flaws. But a few will suffice:

Also, Newsweek’s Kurt Eichenwald has done extensive reporting on the complex, intricate, and shadowy business ties that the Trump Organization has with foreign governments and figures with criminal ties – many of whom have interests that are opposed to those of the United States. In a President Trump, we would have a president who will literally have to choose between what is in the national security interests of the United States or what is in the best interest of his businesses on a host of issues. For all of the right’s pillorying the Clinton Foundation for its supposed “pay for play” culture (another GOP claim that is rich in innuendo, but is short on actual evidence), it is Donald Trump who would have a presidency characterized by a bewildering array of conflicts of interests on multiple fronts.  What Trump has been successful at is selling the idea that he is successful. Even more, than his false claims about illegal immigration, Trump markets his image of a successful businessman as his primary credential for the presidency. Yet, it is that very credential that most demonstrate his fundamental unfitness to serve in the Oval Office.

Conservatives hold Hillary Clinton responsible for Bill’s infidelity and blame her for choosing not to leave her husband. “It must simply be a political marriage,” they say. The possibility that Hillary actually loves her husband despite his flaws and that the two of them may have resolved to make their marriage work apparently never occurs to them. To be sure, I have no way of knowing that this is what the Clintons have done for sure: but the important point is, neither do the Clinton haters either. What a tragedy that I hear many conservative Christians justifying their steadfast opposition to Hillary Clinton on the flimsy excuse that she should have divorced her husband. Does it matter to them that God hates divorce (Mal. 2:16)? That while Scripture allows for divorce in cases of marital infidelity, it certainly does not require divorce (Mat. 19:3-9). In fact, the prophet Hosea is instructed to take back his unfaithful wife Gomer, after she has sold herself to prostitution (Hos. 3:1)! Isn’t it interesting that Al Gore distanced himself from Bill Clinton when he ran for President in 2000 because of his sex scandal? But in the end, it was Al and Tipper Gore who ultimately divorced; meanwhile, Bill and Hillary are still together. Hence, Jesus warns, “Do not judge, or you too will be judged. For in the same way you judge others, you will be judged, and with the measure you use, it will be measured to you” (Mat. 7:1-2).

This is only a brief sketch of the many flaws in Trump’s character that should give Christians pause from the uncritical endorsement of him we see from so many others. And to be sure, some conservative Christians have opposed Trump’s candidacy, and many have gone to great lengths to affirm that they believe Donald Trump represents everything Christianity should be against. The point here is not to suggest that those who vote for Donald Trump are not being faithful Christians.  Rather, we must decisively reject the erroneous idea, propagated by the so-called “Christian Right” that Christian social ethics is synonymous with uncritical support for the fortunes of the Republican party – the idea that voting Republican represents a “litmus test” for whether someone truly is a Christian. The fact of the matter is that Christians live in a fallen world and should not act like we are surprised that our governments are led by men and women who fall far short of God’s standards of righteousness and holiness (Mat. 4:8-9; Rom. 1:18-32; Rom. 3:23; 1 John 2:15-16).  Character flaws are not Democratic or Republican; they are human.

Far worse, Christian conservatives too often have narrowly defined the universe of “family values” issues that believers should judge candidates on – such as abortion and same-sex marriages – while ignoring tons of other moral concerns: racism, social injustice, environmental degradation, war (and specifically, lying about the reasons for the Iraq War), poverty, inequality, economic policy, and foreign policy among others. Apparently, God does not care about these issues, they seem to say. When a broader range of moral concerns are incorporated into a Biblical vision for the political world, it turns out that God’s Word does not fit neatly within the narrow ideological prisms of conservatism or liberalism (or any other “ism” for that matter). For example, the Bible, to be sure, does condemn homosexuality (Lev. 19:22; Rom. 1: 26-27; 1 Cor. 6: 9) and abortion by implication (Jer. 1: 5).  But the Bible literally has hundreds of verses about poverty, how the poor are to be treated with compassion, and God’s concern for social justice. But guess what the “Christian Right” spends the most time focusing on? Social conservatives emphasize the things the Bible barely mentions, and barely mention the things that the Bible emphasizes. “Woe to you, teachers of the law and Pharisees, you hypocrites! You give a tenth of your spices – mint, dill, and cumin. But you have neglected the most important matters of the law – justice, mercy, and faithfulness. You should have practiced the latter, without neglecting the former. You blind guides! You strain out a gnat and swallow a camel” (Mat. 23:23-24).

Rather than seeing politics as a clarion call for us to huddle in our partisan corners, it should call believers to humility. Christian social ethics cannot be reduced to a carefully selected Picadilly menu of hot-button issues that are characterized by litmus tests and pat answers to difficult moral dilemmas. Christians must expand their moral universe to include concern for social issues that might make us feel uncomfortable. Believers are free to come to different conclusions about how best many of these issues should be addressed and we should not be shunning our brothers and sisters simply because we disagree on politics. There is plenty of room for people of faith to have different opinions on “disputable matters” without withdrawing fellowship from one another (Rom 14; 1 Cor. 8). Above all, we should be praying for all leaders in authority (myself included, especially!), not just those we agree with politically, and being about the business of being good citizens (Mat. 22:21; Rom. 13: 1-5; I Tim. 2:1-4).  It is only when the church embraces the Bible’s true ideal for its social engagement that it can expect the world around us to pay attention to its witness.