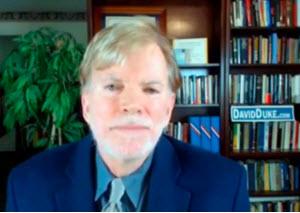 Interestingly, Tyler Bridges, the author of the biography, “The Rise of David Duke”, believes that he is now witnessing the “fall of David Duke”.

Bridges mentioned this dichotomy during my online interview with him Saturday morning, days after Duke’s appearance at a US Senate debate at Dillard University.

The debate made national news, in part, because it was held at an African American university in New Orleans.  Prior to the debate, University police tried to control protestors who were upset that Duke had been allowed to participate in the debate, by using pepper spray.

After the debate, Bridges, a reporter for The Advocate, penned an article for Politico Weekly magazine about that election debate.  Early in his career as a reporter for the Times Picayune, Bridges’s assignment was covering David Duke.  At that time, Duke ran for various elective offices building up so much political support, he almost became the state’s US Senator and then, the Louisiana Governor.

After the governor’s election, Bridges wrote his second book about the Edwin Edwards-David Duke gubernatorial match “Bad Bet on the Bayou: The Rise of Gambling in Louisiana and the Fall of Governor Edwin Edwards”

Early this spring, Tyler Bridges attended a Donald Trump rally in Louisiana. Afterwards, he penned an article about that experience.  In that article, he described that he was struck how the Trump and the early 1990’s Duke rallies were very similar.  The Trump rallies had the same anger and in many respects, the same message.

Months later, Duke decided to run for US Senate and recently qualified for the recent debate by achieving a 5.1% tally in a recent poll.  The cutoff was 5.0%. The contest at Dillard was the second and final televised debate prior to the upcoming election, this Tuesday.

While Duke has said he won the debate and claims he can make the runoff, Bridges has serious doubts about both.  Bridges believed that while a certain narrow sector of a white audience might agree with Duke, the candidate hurt himself with his theatrics and behavior, as well as with his political beliefs.  Bridges said the republican candidate for US Senate actually got himself into an argument with the moderator, John Snell, who Bridges believes is experienced, very fair and unflappable TV reporter and anchor.

While Tyler Bridges believes that all of the candidates are pushing an “outsider” message, which is attractive in this Trump election year, the candidate showed himself as a disrupter, and if elected, Bridges feels he would be a disruptive force in Congress.

Duke has a long record, particularly over the past few years after being released from prison, of denouncing and ridiculing the Jewish people.  The white advocate openly touts that Jews control the media and other major institutions and complains that they want to corrupt the White gene pool.  During the debate, while the candidate did speak out against this so-called Jewish control, Bridges said that during his run for elective office including this year’s election, Duke generally disguises his antipathy for Jewish people.

Towards the end of the interview, Bridges responded to questions about his soon-to-be-released book, co-authored by Jeremy Alford of Baton Rouge.  The book chronicles the recent gubernatorial race in which John Bel Edwards ultimately bested David Vitter.  Bridges said the book, “ Louisiana Longshot” is about “a Senator, a soldier and a serious sin”.  Those who might be interested in pre-ordering the book can do so by visiting http://louisianalongshot.com/

The book will make a great Christmas gift for political junkies and others who have an interest in Louisiana politics.

More in this category: « Donald Trump and the Christian Conservative moral cross to bear FBI's Comey's 2nd letter to Congress proves Trump is wrong about Clinton, once again »
Login to post comments
back to top