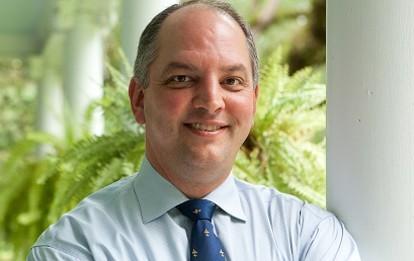 A new Louisiana poll conducted by Southern Media and Opinion Research (SMOR) between May 3 and May 6 reveals that Democratic Gov. John Bel Edwards has a 53.8% job approval rating.

That’s a drop of nine percentage points since SMOR’s last poll, which was conducted back in November 2016.  SMOR concludes that Edwards’ honeymoon with Louisiana voters is officially over.
While blacks continue to give Edwards high marks, his support with white voters  has dropped with only 44% giving him a positive rating.  Overall, 9.8% gave Edwards an excellent rating and 44% said his performance has been good.
Meanwhile, President Donald Trump gets a job approval rating of 51.5% from Louisiana voters, according to the poll.  He gets an excellent rating of 19%, while 32.5% said his performance has been good.
Republicans give Trump a positive job rating of 91% and eight percent as negative.  Democrats give Trump a 72% negative rating and a positive rating of 27%.
The SMOR poll also surveyed 500 likely Louisiana voters on other issues and problems facing Louisiana.  It has an accuracy of +/- 4.4%.
When asked if the state is headed in the right or wrong direction, 52% said the wrong direction.  That’s up from SMOR’s last poll in 2016 when 42% said the state was headed in the wrong direction.
As for the most important problems facing Louisiana today, education came in at number one, cited by 33.4% of those polled.  That’s not unusual, according to SMOR.
What is unusual is that “Budget/State Finances/Government Spending” came in tied for second place with “Economy/Jobs/Unemployment.” Both were picked by 22.8% of those surveyed.
Other problems facing Louisiana included “Politics/Governance/Corruption/Ineffectiveness” 16.4%, “Infrastructure/Highway/Bridges” 15.8%, “Healthcare/Health Insurance” 15.1%, “Taxes/Tax Inequity” 12.2%, and “Crime/Drugs” 11.3%.
The state is facing a budget deficit of $400 million, so the question was asked if the state’s financial problems are primarily too much spending  or not enough revenue.  Respondents chose too much spending by 54.4%., while 25.8% said not enough revenue, and 16.2% said both.
Currently the tax on gasoline purchased in Louisiana is 38 cents per gallon of which 18 cents is a federal tax and 20 cents is a state tax.  When asked if they wanted their legislator to support a 17 cents  per gallon increase in state taxes on gasoline, a whopping 66.7% of respondents said no.
TOPS is a program that pays the college tuition for eligible students.  When asked if the Legislature should fully fund TOPS in this year’s budget, 60.7% said yes.
A question was asked about Obamacare.  Eight percent said to keep it as it is now and 41.7% said to keep and improve it, while 34.1% said to repeal and replace it and 13.4% said repeal and not replace.
Another question was do you favor further  budget cuts being made to community hospitals in Louisiana.  The response:  77.2% said no.

GOP stands by its man
Supporters of President Donald Trump are sticking with him on the firing of FBI Director James Comey.  Only 6% disapprove of the firing.
Overall, it is a different story.  Only 37% believe it was an appropriate action, while 34% say it was inappropriate.  No opinion was voiced by 29%.
That’s the findings of a poll conducted shortly after Comey’s firing by Morning Consult/POLITICO,  The margin of error is plus or minus 2 percentage points.
Partisanship is a strong determinant in how  voters are reacting to the firing by Trump.  Voters split along party lines with 61% of Democrats saying the firing was inappropriate, compared to 11% of Republicans who say the same.
In a Morning Consult/POLITICO poll in April, 31% of Republicans said that Comey should be fired.  After Trump’s decision, that jumped to 62%,
Democratic support has remained consistent.  In April, 22% of Democrats said Comey should be dismissed.  After the firing, 16% say it was the right thing to do.
Asked to choose their preference on what body should lead the investigation in the Trump campaign’s alleged connections with Russia, voters responded as follows:
*36% say a appoint a special prosecutor.

More in this category: « McMaster: Trump to Russia "wholly appropriate, "not aware of where information came from" Confederate outrage over Louisiana war monuments, HB 71 »
back to top