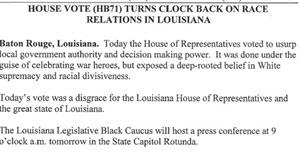 On Monday, the Louisiana black caucus walked out of the House of Representatives after that body approved HB 71, legislation that would prohibits state and local government entities from taking actions with respect to removal or destruction of public military memorials.

While the legislation does not specifically target confederate monuments, it’s intent is obvious.

The black caucus said in a press release after the vote that it usurped local government control and that it exposed a deep-rooted belief of white supremacy.  Supporters deny that the legislation is racially-motivated.

Above are recent tweets concerning this issue.

More in this category: « Governor Edwards job approval higher than Trump in Louisiana With Trump at helm, Republicans need to decide party or country »
back to top