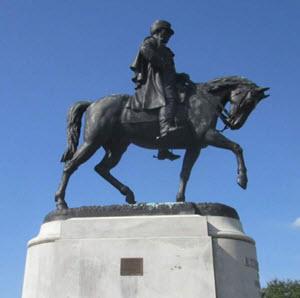 Well, according to New Orleans native, and conservative columnist, absolutely.  In fact, that writer, Quin Hillyer, who a long history of opinion pieces ranging from National Review to the Washington Esquire feels so upset about Landrieu’s decision, that during a Facebook Live event with me earlier today, he said that Landrieu’s handling of the Beauregard monument that sat on the edges of City Park, makes the Mayor “lower than cow dung”.

Actually, Hillyer wanted me to quote him on those very words.

In first addressing the issue, Hillyer said, that one “Will probably, in fact not probably definitely, not find a conservative New Orleanian in the media who has been nicer or more complimentary through the years to Mitch Landrieu than I.  You would not think that that I would have been so complimentary because he's a liberal and I'm I'm a conservative”.

Hillyer said his comment is not just some random right-wing response but reflects how bad Landrieu has handled the monument situation.

“He has introduced racial and other discord into her city that was healing”, said Hillyer about Landrieu.

The conservative columnist said, Landrieu “should actually pay attention to what PGT Beauregard and Robert E. Lee did to reconcile the wounds of the nation after the war and especially Beauregard who is a Louisiana native who grew up in it was a leading citizen of New Orleans doing wonderful things for the city both before and after the war and who put himself on the line not just for reconciliation between the states but for racial reconciliation.  He fought for civil rights .  He argued for integration of schools, the for integration of public places and was a leading citizen for black civil rights after the war.  That's a lesson you can teach that's a better lesson than saying oh we're going to destroy this iconic piece of New Orleans architecture or sculpture in order to try to position the mayor for a presidential race.

How does Hillyer feel about the other confederate statues? What would have been other alternative ways to deal with the powder-keg issue?  How does he feel about the use of the confederate flag in promoting the keeping of the monuments?

You will definitely want to watch the video.

More in this category: « With Trump at helm, Republicans need to decide party or country War: Trump should stop press briefings, end interviews with mainstream media »
back to top