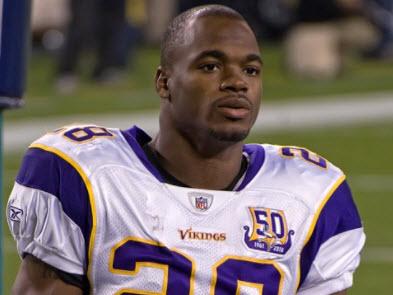 Imagine a small-time beauty queen, say Miss County Rural Electric, who has won her way through some local competitions on her way to winning the state prize. The girls notice her, especially when she drapes her Rural Electric banner across her swimsuit, and the boys notice her because, well, because they’re boys. But one day she is asked to attend a function with other contest winners when another invitee enters and sucks the air out of the room. All talking stops and all eyes turn as another contest winner has arrived, sashaying into the room with an elegance you can’t teach and a smile brighter than the diamonds at Jared.

It seems that in his first OTAs in a Saints uniform, the future Hall of Fame running back is, indeed, turning the heads of his new teammates. Here is a sampling of quotes taken from Jeff Duncan’s piece last week in the local wipe:

“Every clip is ‘Can A.P. still do it?’ safety Kenny Vaccaro said. “Just wait. Y’all about to see for yourself. He’s going to be a factor … He does not get tired. He’s a different breed.” Cornerback Delvin Breaux was impressed enough by seeing Peterson in the weight room performing a series of one-legged plyometric box jumps. “Who the hell does that?!’” Breaux asked in disbelief. “Man, I’ve never seen that before. And that was on the same leg he hurt. I said, ‘Oh, he’s ready.’” At a nearby locker, cornerback P.J. Williams nodded his head knowingly. “He’s got a gallop,” Williams said. “Y’all about to see.”

My, such praise! And what does Mark Ingram think? Nowhere did I see a quote from the incumbent starter at Peterson's position, who  might not get a carry this season if you can believe the honey-dripping OTA adulation! In fairness, Ingram might not have been present the day his teammates gushed accolades about the new guy, but it is interesting to wonder what's inside Ingram's head. He isn’t exactly coming off a bad season. In fact, he is coming off his best NFL season with 1,043 yards rushing for a 5.1-yard average and six touchdowns. It helped that 2016 was only the second time in his six years (2012 the other) that Ingram was active for 16 games.

When the Pen & Pencil Fusiliers finally pin him down, and they surely will, Ingram will probably take the high road and say something nice about Peterson’s career and how it’s a long season and you can’t have enough good players, yadda, yadda, yadda. What Ingram would never say is that Minnesota did not re-sign Peterson because, in their eyes, he was washed up.

Oh, we’ve been a part of the washed-up athlete story. Remember the departures of Morten Andersen, Rickey Jackson or Sam Mills when an earlier group of geniuses decided the players were in decline and not worth the money they were asking? And then, the pride of professionalism took over, and another teams takes a chance and suddenly it’s reincarnation time.

That is exactly what Who Dat Nation is hoping will happen with Adrian Peterson in the black and gold. Another year or two with a fresh start and redemption for a great player who was let go too soon. Just don’t dismiss Mark Ingram yet. He will likely get the bulk of the snaps this season, no matter how attractive the new guy is in June. And that is how he will answer those who ask what he thinks of Adrian Peterson?

More in this category: « Trump's Coastal Restoration Disconnect from Louisiana's needs BREAKING: Trump will not assert executive privilege with Comey testimony »
back to top