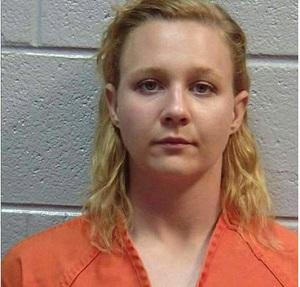 To maintain the security of our homeland, our federal government depends on the services of contractors who work with our intelligence agencies.

It is imperative that these contractors employ individuals of high character and integrity for their mission is so important to the security of our nation.

Sadly, one such contractor made a terrible mistake when it hired an unstable 25-year old woman who legally changed her name to Reality Winner.

Ms. Winner was arrested this week for illegally providing top secret material to the news outlet, the Intercept.

After her arrest, some disturbing information has been uncovered about Ms. Winner. On his voluminous social media posts, Ms. Winner has made it very clear that she hates Donald Trump. In fact, she referred to our President as a “piece of sh..,” not exactly the best way to refer to her boss.

Prosecutors have also announced that they discovered the contents of Winner’s notebook. She declared an intention to “burn the White House Down…find somewhere in Kurdistan to live.”

She also pledged allegiance to the terrorist group, the Taliban.

In recorded prison calls to her mother, Winner admitted that she “screwed up” and coached her to tell the media that she was “scared.” Reportedly, she told her sister that she would receive favorable treatment at a bond hearing because she is “pretty, white and cute.”

Unfortunately for Winner, the hearing yesterday before a judge in Augusta, GA did not work out in her favor as she was denied bond and remains in jail. Prosecutors argued that Winner was a flight risk if she was released. Thankfully, the judge ordered Winner to remain behind bars until her trial.

These new developments show that Winner likely committed treason. There is no doubt that she illegally shared classified information with a news site. She holds views that are clearly anti-American and hates the Commander-in-Chief. A person with such a mindset should never have been hired by a contractor working with the National Security Agency.

This entire episode raises plenty of questions about the hiring process for contractors dealing with top secret information. Only patriotic individuals of highest character and integrity should be hired for these positions, not youngsters who share radical views online.

This sad case illustrates why the nation is dealing with so many intelligence leaks to the media. Our government has been compromised by the current arrangement with private contractors. It is obvious that the background checks need to be seriously upgraded. In the future, there should never be anyone else like Reality Winner hired to handle our nation’s most classified information.

More in this category: « Only Trump can clear the Comey cancer clouding his administration Hard for Trump to accuse Comey of leaking classified information »
back to top