Hard for Trump to accuse Comey of leaking classified information 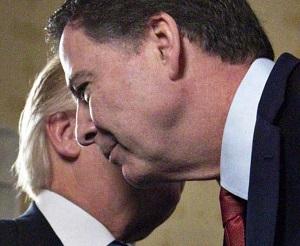 There’s an old phrase that “a request from a superior is actually a command.” That was the essence of ex-FBI Director James Comey’s take on President Donald Trump’s expression of hope that former National Security Advisor Michael Flynn be left alone because he was “a good guy.”  Flynn is not, but that’s not the point.

The strangest part of the Trump-Russia affair is the takeaway that it may be related less to voter manipulation than the, purportedly, salacious materials the Russians may have collected on Donald Trump during a Miss Universe pageant held in Moscow. At the time Trump owned the pageant.

The, allegedly, compromising material was described in a dossier compiled by Christopher Steele, former British intelligence officer, and private eye, for Hillary Clinton’s campaign. She wasn’t shy about using the, now, infamous Access Hollywood tape to tarnish Trump but made scant, if any, mention of the Pageant allegations for reasons that remain unclear to anyone but her.

The Steele dossier is still being verified but it, apparently, weighed on the President’s mind so much that Trump volunteered to Comey that he had nothing to do with Russian prostitutes. Unlike the days of Peter the Great, prostitution is illegal in Russia but, notwithstanding, interacting with pretty Kremlin agents, if true, would be a bigger problem for the President than a businessman’s wild night on the town. It’s the lie, if that’s what it was, that’s more troubling than the alleged behavior.

Comey testified that he was not Captain Courageous and, perhaps, should have stood up to the President under the grandfather clock in the Oval Office when asked to lay off Flynn. That’s true. Comey, also, said that Attorney General Jeff Sessions’ Russian involvement bears further scrutiny. It was unclear what he was talking about, but it sounded ominous.

We, also, learned the former FBI Director, surprisingly, leaked information to a professor at Columbia University for publication in the New York Times. The President’s supporters, unfairly, called a foul on the Director on this account. Here’s why. We have reached a point where much of anything that’s even mildly negative about this President is claimed to be classified. This issue, too, deserves scrutiny.

Comey cautioned the Senate that its primary focus needs to be on Russia’s interference in our free elections because, therein, lies the real harm to America, and the world. That’s only part of the problem because a compromised politician is a dangerous one since his official actions may be susceptible to undue influence and the Russians are good at compromising.

There’s evidence of something wrong at 1600 Pennsylvania Avenue and this show, of which Comey was the opening act, has just started its run. Special Counsel, Robert Mueller, will reveal more, in due course, including any findings that Trump and his allies profited, improperly, from foreign business deals. There’s a lot of unraveling to come.

Obstruction of justice is not hard to prove. Trump told top Russians he invited into the Oval Office the day after he fired Comey that he made things all better by getting rid of the crazy, nut job, Director. Russian Foreign Minister Lavrov though it so amusing that he even joked about it. Despite earlier denials from the administration, Trump, subsequently, went on TV to tell the nation that the Comey firing was, in fact, Russia-related, thereby stabbing his defenders in the back.

The President, it turns out, didn’t need a meddlesome priest, like St. Thomas Becket, whose name was invoked at the hearing, to accuse him. He did the accusing himself.