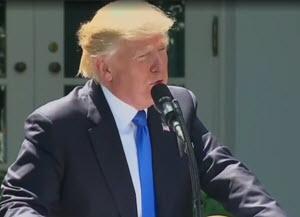 Close your eyes and just imagine:

A Reporter asks President Donald Trump during a press conference whether he will let the public know if he has a recording of his conversations with Jim Comey, former Director of the FBI.

Trump responds with this quote, “Well, I’ll tell you about that, maybe, in the near future”

One day after the fired-Comey testified in front of the Senate Intelligence Committee, in a short Rose Garden press event, Trump was asked about the recordings.  The recording issue first came up when he tweeted about potential tapes after he terminated Comey.  Comey testified yesterday that Trump lied to the nation about the firing, that he did not trust Trump and that the president essentially threatened his job in return for shutting down the FBI investigation against Trump’s former National Security advisor, Michael Flynn.

Within two hours of Trump’s Rose Garden response, leaders of the House Intelligence Committee have asked the White House to produce any tapes that might exist of President Donald Trump's conversations with Comey.

Republican Rep. Mike Conaway and Democrat Rep. Adam Schiff (D-Calif.), the lawmakers have asked White House counsel Don McGahn to confirm whether any tapes exist, and if so, to produce them for the committee by June 23.

In making their request, they did not say “Maybe”.

More in this category: « Hard for Trump to accuse Comey of leaking classified information Trump v. Comey: Battle for the Truth »
back to top