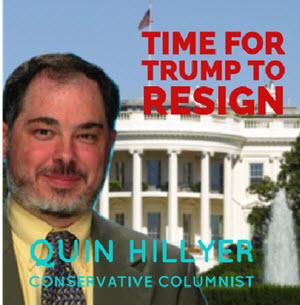 Should or must Donald Trump resign from the presidency of the United States?

According to conservative columnist Quin Hillyer, the question is not only should, but “must”

Prior to first discovering his column that he posted on twitter in which he urged Trump’s firing of Trump, we scheduled an interview which we held this morning.

Below is a transcribed segment of the first part of that interview. after reading it, hopefully you will watch the rest of that segment. Here is the video.

With this latest revelation, Donald Trump is hopelessly compromised vis-a-vis, Russia.And we cannot allow our President to be compromised when it comes to a hostile nation that is the single most dangerous  nation to America's interest. I say this as a life long conservative, someone who has spent forty years actively working for the conservative cause but Donald Trump's entire relationship with Russia for decades has been problematic and if he is now literally talking about trying to veto a law or bill that was passed overwhelmingly by Congress that we would impose sanctions on Russia for its meddling in the elections that to me would be the absolute last straw.

We can go into the details that what we found out yesterday hits so close to home with Donald Trump that that it means we cannot trust him anymore.

More in this category: « Did Donald Trump Jr. commit a crime? What about the Democrats? Crouere: Elections qualifying to rid New Orleans of Mayor Mitch Landrieu »
back to top