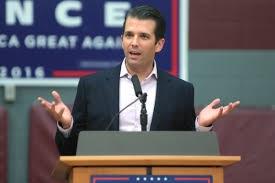 Was Donald Trump Jr. a stooge, naieve or dumb? However unlikely, he’s at the center of another previously undeclared meeting between members of the President’s circle and yet another Russian, as disclosed a few days ago. This time it wasn’t the Russian ambassador, a top flight banker or industrialist. It was Natalia Veselnitskaya who, about then, was trying  a money laundering case in the Southern District of New York, the President’s home turf. Veselnitskaya, with whom Don Jr. was asked to meet, was represented to be a Russian government lawyer.

The meeting was promoted by Rob Goldstone, a flamboyant music flack for a pop star with a well-connected, billionaire father who partnered with the President in the 2013 Miss Universe Pageant held in Moscow. While the President was there, the two men inked a letter of intent, surely between the talent and swimsuit competitions, to build something great and grand together.. The deal fell apart but the relationship didn’t. .

Goldstone wrote Trump Jr. and said, pretty much, I could’ve had Rhonda contact your father, directly, but wanted to talk to  you first. Rhonda is an unknown, so far, but she’s in the loop, now. It was a salesman’s pitch that worked, perfectly. Reading Goldstone’s blandishments provides a clue about why.

“The Crown prosecutor met with [his client musician Emin Agalarov’s] father Aras this morning and in their meeting offered to provide the Trump campaign with some official documents and information that would incriminate Hillary and her dealings with Russia and would be very useful to your father.”

Paul Manafort, and Jared Kushner, who attended the meeting in Don Jr.’s office, also, ignored the red flags. There is no such thing as a “Crown prosecutor” in Russia, at least not since the Tsar Nicholas II, was gunned down with his family, on March 15, 1917. Overlooking that the title “Crown prosecutor” may be code for a real Kremlin official, there’s more confusion in the email, specifically, its use of  the word “official.” That connotes the information was Kremlin work product and high quality, eyes-only stuff.

Russian President Vladimir Putin, repeatedly, denies that his government was involved in the 2016 election hacks, a claim he renewed in the aftermath of the G-20 assembly in Hamburg, Germany. If Putin is to believed, the line in the Goldstone text about “official documents” was, also, misleading unless the word “official” is, also, code for something else.

Putin wants to be believed, even if  this is a textbook case of Kremlin mischief conducted, via proxy, by largely untraceable, alleged private citizenry. Was this an attempt to compromise Don Jr. the abandoned family member who was loyal to a fault. Perchance, because it’s hard to believe. chose all by their lonesomes, to feed disinformation to an unsuspecting disseminator to help Russia, or set him up.

Maybe, Don Jr. did nothing wrong. Gathering opposition research is normal. Connivance, however,  is not, nor is lying about the story the way the Trump administration did until the New York Times informed Don Jr. it was going to publish his emails. Least normal would be trying to get compromising information from a hostile power with a stake in an American  election’s outcome. It’s troubling and People will want to know if the President cleared the meeting.

Consider as well that, maybe, Veselnitskaya had just a single task -to deliver an address, a name, or a phone number. That, too, makes sense.