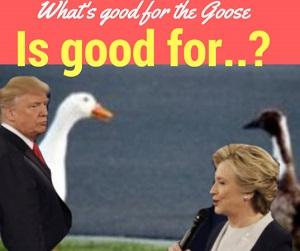 If Donald Trump Jr., the Trump campaign, Paul Manafort and Jared Kushner possibly violated federal campaign law, what about the democrats regarding the information it obtained from Ukraine and the now infamous Steele Dossier?  Aren't those campaign violations too?  And what about free speech?  Shouldn't the defense of the first amendment prime any claim of wrongdoing?

Ever since the Donald Trump Jr. meeting with the Russian lawyer hit the nation’s consciousness, the question of violation of campaign laws has come into focus.

The main stream media and others are claiming that Team Trump has violated campaign law. Trump, his surrogates on social media and elsewhere, feel he and his son (and campaign) are getting "goosed" with allegations of wrongdoing.  In their own defenses, they further claim there is no law broken.  As a backup complaint, they urge we "take a gander" at what the democrats have done with their receiving information from Ukraine and their funding of the Steele Dossier, after all they claim, both deal with getting information from foreign nationals.

Last week, Common Cause filed a federal complaint against Donald Trump and then amended that complaint when more facts emerged. The additional defendants include Paul Manafort and Jared Kushner.

On Monday, I interviewed the VP of Policy and Litigation Paul Seamus Ryan via Facebook Live, to discuss the details of that federal complaint and hey, what about the ganders? We published part I and below is part two.

In the beginning of part 2, I questioned Ryan about the concept of political contributions and mentioned that Professor Derhsowitz and Turley both claim that the first amendment would grant Trump Jr. the right to obtain information from the Russians.

RYAN: It has long been federal campaign finance law and the laws of most states that anything of, “anything of value” that term is used very frequently to define political contribution if it were not written that broadly then it would easily be evaded you could have people outside of a campaign just picking up the bills--for example, it is very common practice in Washington politics for candidates to hire political consulting firms that specialize in generating opposition research.  That's the business they're in, it costs a lot of money, people are being paid to do this research, the research is then being presented to candidates being presented orally, it's being presented packaged in written documents, memos folders binders you name it.  But researching information is big business in this town and there's no reason to believe that that isn't what was going on here in the Trump campaign in its interactions with Russia or at least, the offer.   Donald Trump Jr. has described this in the statement he published that accompany the emails that he published on Tuesday morning--he described this in his statement as political opposition research.  He knows, everyone in DC people outside of Washington might not be as familiar with how campaigns are run, (or outside of state capitals because the same thing goes on in state office elections, city elections) opposition research information is a commodity that is regularly bought and sold.

i then replied about the claims being made by Turley and others that disallowing speech like that would be freezing free speech and prevent politicians and their campaigns from gather information that might be critical to prosecute their campaigns.  I also mentioned that Turley, Dershowitz and others are comparing Trump Jr.’s activity with that of what is being alleged about the Democratic party and information obtained from Ukraine and about the now infamous Steele Dossier in which republicans and democrats apparently attempted to get “dirt” on Trump from foreign nations, particularly Russians.

RYAN: I'm glad you brought it up that's a really good question and from what I know there was something one story that I'm aware of that was written about that the interaction between the DNC and potentially a Clinton campaign and the Ukraine, and it was republished in Politico in January and the information that story was that a longtime political operative employee of DNC she was paid to do opposition research--and because fair market value was paid by the DNC for the information it received, It takes it out of the realm of political contribution.  A political contribution is when a campaign or a political party gets something that they don't pay for-- they get a donation of anything of value that's a contribution.  When the party is paying for things, when a candidate is paying for things, it's a different story all together that are legally. I understand why these two scenarios are being discussed in the same in the same breath in the same context as we're talking about Trump and Russia interaction but-- we certainly, Common Cause has not alleged-- we have never said anything to the effect that it would be illegal for the Trump campaign to buy goods and services from foreign nationals.   There's no law against that.  What we're talking about here is potentially the receipt of something for free from foreign nationals.  But another point you made before you touched on the Ukraine is that-- you know- this it should involve that we should only be regulating it when there is an exchange of money we don't want to inhibit the free flow of information-- what we know from the emails that preceded this meeting--is that this was part, this was presented to Donald Trump jr. as part of "Russia and it's government's support for Mr. Trump highly sensitive information" this, the email exchange gives every reason to believe that there were people being paid to do research on Hillary Clinton, by the Russian government or people closely associated with it, and that was the information that was being offered to Donald Trump jr.

If it had been a separate difference set of fact that looks like yeah we have one, one or two individuals on their own spare time they did some poking around on the internet and then they wanted to meet with the candidate, to offer a candidate campaign person, offer them that information, that's not this case.  And it's quite possible under that fact pattern that a long-standing exception in federal law, from the definition of contribution for volunteer activities would apply.  This doesn't look like campaign volunteers or campaign staff doing work for a campaign, this looks like Russia's government coordinating effort to dig up dirt on Hillary Clinton and offering it to Donald Trump Jr.  That's a very very different scenario than the free flow of information that we want to protect.

RYAN: You know I don't know enough the details I've looked into the Ukraine DNC connection so I I have a legal opinion on that-- with the Steele dossier, again, what it boils down to, from a campaign finance law perspective I'm not talking about what's right and what's best for democracy, but from a campaign finance legal perspective, if someone was paid fair market value to produce that steele dossier then it takes us out of the realm of campaign finance contributions and into the realm of-- hey do we want to have more restrictions on who you could hire to do work for your campaign?  Who you can pay fair market value to buy goods and services from.  And again I don't even know if that dossier and the Steele dossier, perhaps you know, whether that ended up in the hands of the Clinton campaign or was it that people associated or supporters of Clinton.

SABLUDOWSKY: Yeah that's yeah no I mean that's actually a point I raised in response to a Facebook post to me I think that's important but do you think it's important?

RYAN: Well it's a huge importance from a campaign finance perspective, whether you're talking about did the campaign receive an illegal contribution or even ask for one, solicit one.   It matters whether the campaign ever received anything or whether the campaign ever asked for anything.  So whether or not campaign people were involved either the candidate or agents of the candidates, that term is described in the law, for legal purposes, it really matters a lot.  Again I think it's really worth having this broader conversation stepping out of the legal framework and just talking about what's good for democracy and then you know maybe maybe it's fair to critique any involvement by foreign nation into our elections whether they are being paid to do it or not, but you know I'm a campaign finance lawyer, the complaints we filed are based on campaign finance law and that's really my area of expertise.  that's what that's where we think the legal problems exist today for Donald Trump Jr and the Trump campaign

SABLUDOWSKY: Again talking about anything of value, i I was reading again Turley's a column and and Dershowitz also and one thing that struck me is they're saying look if you if you get information-- again we talked about that --you know, that's speech, it's free speech and you shouldn't have freeze-freeze free speech but what if the situation was like a computer code or something of that nature I mean that's also speech yet I would assume that somebody would argue that that yeah you can't just give a computer code to a campaign or you can't give, say a campaign information email lists things of that nature—and that’s information too.

RYAN: That's precisely why the definition of contribution is drafted as broadly as it is in federal law and the laws of just about every state--because it's just as valuable to a campaign-- campaigns would be grateful for receiving anything of value from outside of the campaign-- things that they would otherwise have to pay for if they were to try to obtain them in the marketplace.  So I'm with you computer code, that has a value to it, yeah there's a speech element--the courts have never said that if we call it speech it's immune from any campaign finance regulation.   That isn't how First Amendment lawyering works.  It's not how the courts handle First Amendment analysis.  instead the courts always say what's the burden on First Amendment activities?  What are the governmental interests that might justify that burden? And the courts weigh them.  We have all sorts of restrictions on speech activities in this country and they were only allowed by the US Supreme Court and by the lower courts when they are deemed by the courts to be a fair balance of fair trade words we're protecting a public interest here, yes we're gonna give up a little bit of our First Amendment rights in order to do so.  The same is true for monetary contributions-- we have people who have been arguing for decades that, hey, that's symbolic speech that's First Amendment activities and the courts have acknowledged that--the courts have said yeah giving money to a candidate as a way of expressing yourself, but it's also potentially corrupting so we're gonna allow reasonable limits the courts have said, we're gonna allow reasonable limits on money and politics even though, even though, there was a speech element to that, actually.