From the first TV debate to "no debate", the future of politics is online video 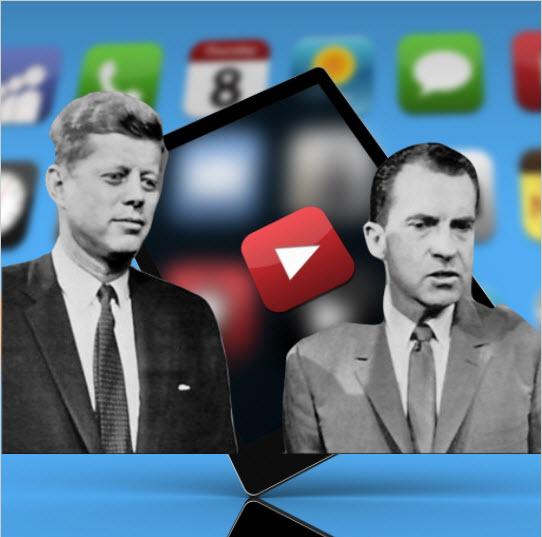 From the first TV debate to "no debate", the future of politics is online video

It’s been a long time since President John F. Kennedy faced Richard M. Nixon in the first televised Presidential debate.  That was 1960.  Television was still in its infancy with homes being filled with maybe one television, if that, and possibly three channels to watch, if that.

By comparison, fifty-seven years later, every home has at least one television it seems.  Or, let’s put it this way, maybe three or four televisions sets and then, if you add the mobile phones, tablets and computers, access to information increases exponentially.

It’s not just the devices or the number of them that makes a difference.  It’s the content and the broadband married with the mobility.  Many of us now can watch a show on television, take our tablet out to the car and continue to watch the same program without missing a commercial.  We can park our vehicle, enter our point of destination, take out our cell phones, push the icons and still be tethered to the tube.  At least, that tube now in our hands.

So, given the freedom to access information from anywhere about anything, at any time, the world of politics changes radically to fit the moment.

Now, the question is, how do candidates, legislators, political parties organizations take advantage of what technology has wrought?  Even more so, with the super-duper app, online video, how will those who want to reach out and connect to their potential voters best capitalize on getting the edge, just like Kennedy did with Nixon, only half century ago?

Jim Brown, who was in political office in Louisiana for 28 years and I will discuss these issues today via online video Facebook Live, starting at 4:30 PM.

You can watch it here at Bayoubuzz.com, on Facebook