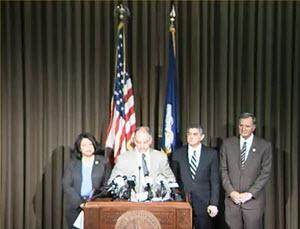 Here is the statement from the Governor's office:

Today, Gov. John Bel Edwards announced the award of Hazard Mitigation Grant Program (HMGP) dollars to several local entities throughout the capital region where significant flooding damage was sustained in 2016. These grants will be used to fund local resiliency projects aimed at equipping local governments with the tools needed to better withstand natural disasters in the future.

“The ability to fund these local resiliency projects highlights why we have been fighting so hard for every penny of federal disaster relief money,” said Gov. Edwards. “The 2016 floods devastated large parts of the capital region and left many of our fellow Louisianans fighting to rebuild their homes and businesses. Local and state government will continue working just as hard as the people we serve to restore our communities and position them to better withstand dangerous natural disasters in the future.”

Nearly $22 million in HMGP dollars was announced in December 2016 for local resiliency projects across the state. Today’s announcement brings the combined total in HMGP funds throughout the capital region to nearly $221 million. This region is made up of the following parishes: East Baton Rouge, Livingston, Ascension, East Feliciana, Saint Helena, West Feliciana, Pointe Coupee, Iberville and West Baton Rouge.

HMGP is administered by the Federal Emergency Management Agency and is available statewide following a declared disaster to protect life and property from future risk. The governor has the authority to allocate the funds for eligible mitigation activities. To be eligible, a project must be cost-beneficial (the benefits over the life of the project must exceed the cost of the project) and provide a long-term solution. Specifically these funds are used to reduce future flood losses through activities such as elevating floodprone structures, improving drainage or providing greater flood protection.

Gov. Edwards directed the following HMGP funds to parishes throughout the capital region: