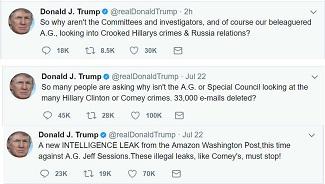 Enter one, Rudy Guilliani for one, Jeff Sessions?

That is the latest rumor according to Axios today.

As per the publication, “President Trump is so unhappy with Attorney General Jeff Sessions that he has raised the possibility of bringing back Rudolph Giuliani to head the Justice Department, according to West Wing confidants.

As perhaps further evidence that at least something is going to give, even if it is not Guilliani taking the advantage, once again, today President Donald Trump has taken another swipe at his own Attorney General via twitter.  It is well known that the President has been angry at Jeff Sessions since the top lawmaker decided to recuse himself.

The New York Times interview, last week, marking his first six months, was clear evidence that Trump was still upset with Sessions’s recusal, basically blaming the former Alabama US Senator, for the problems his administration now has with the special counsel investigation of the Russian influence in American elections.

However, Axios points out that even Republican Senators might have a difficult time backing the former New York Mayor in that position or any position in the cabinet--given the length of and the tenacity of his support for Trump and given the need now for independence of the AG office.

It is also clear that independence is not what Trump is looking for., at all

More in this category: « OJ Simpson feigns, avoids truth like a pro, yet paroled New Orleans Mayor Mitch Landrieu gets the Axe; national ambitions still discussed »
back to top