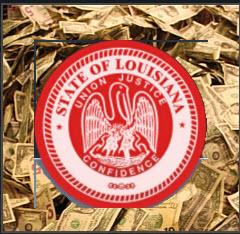 by Lou Gehrig Burnett
Money flows in treasurer’s race
It may not be a glamorous race or one that has captured the interest of voters, but  it  could  turn out to be an expensive one.  We’re talking, of course, about the race for the office of state treasurer of Louisiana.

The three main candidates in the race have been busy raising money.  They are John Schroder,  Angele Davis, and Neil Riser.  All three are Republicans.
Let’s look at the finances for each candidate, based on reports filed with the Louisiana Ethics Commission through July 6.
JOHN SCHRODER
Schroder resigned as s state representative to make the race.  He is a small businessman and real estate developer from Covington.
He had an early lead in the money race with $500,000 in the bank as of January 1.  Since the first of the year through July 6, he has raised another $303,813.  His expenditures so far are $155,332.
That gives him the hefty campaign fund of $638,279 cash on hand as of July 6.
ANGELLE DAVIS
Davis, who is from Baton Rouge, is president and CEO of the Davis Kelley Group.
She had no money on hand as of January 1.  Since January 1 through July 6, Davis has raised $371,664.  She has spent $53,754 so far on her campaign.
As of July 6, Davis reports having $315,373 cash on hand
NEIL RISER
Riser is a state senator from Columbia and is a funeral home owner.
As of January 1, he had $20,193 in his campaign fund.  Since January 1 through July 6, he has raised $335,162.  He has already spent $153,197 on the race.
As of July 6, Riser has $201,407 in his campaign fund.
There are four other candidates who will be on the ballot on October 14, but it highly unlikely that they will be able to match the fundraising prowess of the three aforementioned candidates.
They are Ron Caesar, a black Independent, who is from Opelousas.
Derrick Edwards, a black Democrat, who is from Baton Rouge.
Terry Hughes, a white Republican, who is from:Lafayette.
Joseph D. Little, a white Libertarian, who is from Ponchatoula.