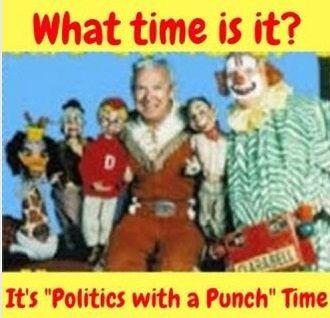 What time is it?

It's Politics with a Punch time--which ain't just some little howdy-doody event  And what a show we have for you Thursday evening July 27 at 8PM at the Eiffel Society, 2040 St. Charles Avenue, New Orleans.  Hey, come join the peanut gallery!!

Check out who is on the panel:

So what is Politics with a Punch, which by the way, is in the 15th year of its existence?

It is a show Jeff Crouere, who is our host, founded way back when politics, business, entertainment, comedy, news needed a local boost to poke at the latest, the laziest, the greatest, the most controversial newsmakers, local and afar.

Now, with the New Orleans City Council and the New Orleans Mayor's races at full throttle, with President Trump tweeting about the inadequacies of his own Attorney General, with crime in New Orleans so bad, it's becoming the city's top employer--it's time to laugh.

And laugh, you will.

But only if you attend. Doors open at 6PM and many of our attendees come eat dinner--prepared by the Eiffel Society cooks, themselves.  And, dinner's tasty and the drinks are simply sublime.

If you would like to take advantage of this opportunity, purchase tickets in advance on-line at our website: