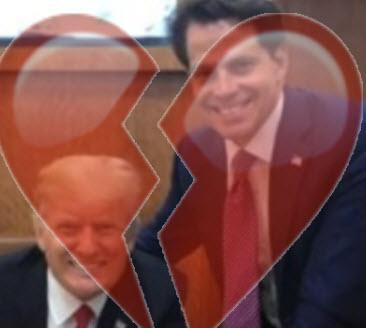 Can you feel the love?

Remember Anthony Scaramucci, the brash New Yorker who abruptly appeared in the press room within the Trump White House, did some cussing and dissing, orchestrated the removals of former Press secretary Sean Spicer and the Republican Chairman Reince Priebus?

Well, the man who kissed and threw out love bouquets to Spicer, Priebus and just about everybody who crossed his path and who declared his love for the President had no bounds, has just received what some might call, the "kiss of death". Mooch, as he is commonly known, has gotten the smooch.  He's been quickly demoted and perhaps ousted by the new Chief of Staff, General John Kelly.

"Anthony Scaramucci has been removed as White House communications director after 10 days on the job — and less than a week after an expletive-laden on-the-record rant to The New Yorker's Ryan Lizza — per The New York Times. Axios has since confirmed the news.

Meet the new boss: Scaramucci's departure came at the request of new chief of staff John Kelly, who is making his presence known in his first day on the job. Axios Jonathan Swan reports Kelly broke the news to Scaramucci almost immediately after being sworn in.

What's next: The NYT notes that it's not clear if The Mooch will stay on in the White House or be forced out completely."