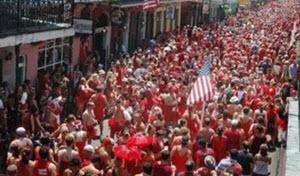 Make no mistake about it--August in New Orleans is "HOT".

The weather?  Sure, just as it is in so many other cities USA this time of year.  Heck, it's in the 100's this week in the North West, isn't it?

No, HOT!! as in plenty of things to do for tourists, for natives and for those who are uncertain which category they might feel more comfortable.  The first Saturday of August, which is this week, is the incredibly popular White Linen night in the Art district. Then, there's Satchmo, Red Dress Run, Southern Decadence, Dirty Linen night, conventions and so much more.

IN CASE YOU MISSED IT:

New Orleans continues to garner national and international attention as a world-class destination. Recent honors include:

Meetings (3,000 or more in attendance) include:

More in this category: « Sanders: Trump weighed in on Don Jr. Russian statement Louisiana Association of Business and Industry (LABI) is on the move, Literally »
back to top