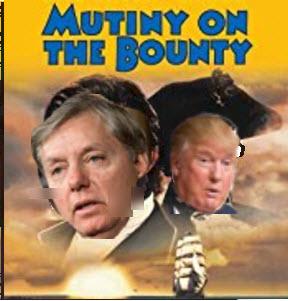 The world is witnessing a political mutiny that is unprecedented in the annals of American history. Donald Trump was duly and overwhelmingly elected President of the United States on Tuesday November 8, 2016. He received the votes of almost 63 million Americans, the highest total ever for a Republican Party presidential candidate. Through a remarkably targeted campaign, he won the electoral votes in 31 states, destroying his opponent in the Electoral College. For any other President, his opponents would have given him a “honeymoon,” and allowed his administration to get started and implement his agenda.

Unfortunately, these traditional American political norms do not apply to Donald Trump. Despite his legitimate victory, Trump has been the subject of an unrelenting and unparalleled number of deceitful attacks from his disgruntled opponents. From the second of his victory, a sinister network of deep state operatives, Obama holdovers in the bureaucracy, never Trump Republicans, Democrats, and biased liberals in the media have conspired to overturn the election results.

The reason this corrupt cabal is trying to invalidate the will of the American people is that President Trump’s agenda is a severe threat to their livelihoods. The “sultans of the status quo” view the President’s plan to put “America First” and “Drain the Swamp,” as a call to political arms and a battle for their survival.

To protect their power, Trump’s many opponents have tried everything from challenging the vote totals in certain states to intimidating the members of the Electoral College. When that failed, the next step has been to manufacture the “Russian collusion” nonsense, which has led to the precarious situation which exists today.

Sadly, the Attorney General Jeff Sessions made the horrible mistake of recusing himself, which set in motion the process that created the Special Counsel, Robert Mueller, who is trying to find a crime to tie to President Trump. There is nothing in in the “Russian collusion” story, so Mueller is now investigating the complicated financial dealings of the President and his business empire.

Although the President has expressed his displeasure with this “witch hunt,” if he attempts to fire Mueller, Congress will try to impeach him. According to Senator Lindsey Graham (R-SC), “any effort to go after Mueller could be the beginning of the end of the Trump presidency.” With Republican “friends” like Graham, the President certainly does not need enemies. To bolster his threat, Graham is working on legislation to prevent the President from firing Mueller without “judicial review.”

The actions of Graham and several other GOP Senators show how the Republican led Senate has abandoned President Trump. For example, the Senate, along with the House, overwhelmingly passed a bill imposing sanctions on Russia and preventing the President from easing them. It is the equivalent of Congress usurping presidential authority and since he has few Capitol Hill allies, the President was forced to sign the bill. A veto would have surely been overturned in an embarrassing display of presidential weakness.

Although Obamacare has been an unmitigated disaster and Republicans in both houses of Congress have promised for eight years to offer relief to the American people and “repeal and replace” it, Senators left for a month-long recess without taking needed action. The President exhorted Republican Senators to pass a bill before leaving for an undeserved vacation, but they ignored his protests and scurried out of D.C. anyway. The entire Trump agenda of major promises such as healthcare reform, tax cuts, infrastructure spending and building a border wall is now in total jeopardy.

One of the major problems has been the lack of support for President Trump in the Republican led Congress. These turncoats are working with Democrats to not only stop the Trump agenda, but also to empower and protect Robert Mueller.

If congressional Republicans cared about the agenda of President Trump and his 63 million supporters, they would be doing something to investigate the misdeeds of the former administration, Hillary Clinton and the unprecedented number of leaks coming from moles within massive federal bureaucracy. President Trump has been battered by 126 leaks in the first 125 days of his administration. The latest embarrassment involved the leaking of transcripts of his conversations with the leaders of Mexico and Australia. These leaks are undoubtedly federal crimes, which should be investigated by both the Justice Department and Congress, but it seems all anyone wants to discuss is the “Russian collusion” conspiracy.

This administration faces threats on many sides, but the most severe danger comes from the Special Counsel. Over the last few weeks, Mueller has assembled a Democratic Party dream team of 16 attorneys, including eight who gave contributions to liberal candidates such as Hillary Clinton. Mueller is also compromised because he has close ties to former FBI Director James Comey, who clearly engineered the investigation by leaking his infamous memos.

In any other administration, Mueller would be fired, but President Trump’s hands are tied. If he fires Mueller, he will be impeached and the resulting firestorm will make Watergate look like a day at the park.

As President Trump watches Mueller expand his staff and his mission and impanel a grand jury, he is surely asking himself why he wanted this job in the first place. Along with his attorneys, his family and his “deplorable” base of supporters, President Trump is alone in a sea of killer sharks working overtime to deliver a political death blow.

At this point, it is reassuring to know that a Bible study has been started in the White House.. Prayers may be the only thing that can save President Trump as his legions of enemies conspire to destroy him. The mutiny on the Potomac has begun, and the fate of the Captain of our ship, President Trump, hangs in the balance.

More in this category: « Mitch Landrieu using US Mayor’s platform as his own monument US needs Mexican partner to fight Opioids, not border wall »
back to top