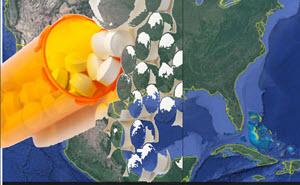 In some places, for anywhere between $20-$40, per gram, a respectful driver will bring black tar Heroin to anyone’s door wrapped in balloons carried in the delivery man’s mouth. Scott was unable to kick his habit, though he tried rehab more than once, and he died on a friend’s couch. At the funeral, Scott’s father, a decorated Veteran, told friends his son “couldn’t be saved.” Heroin rehab is something that often takes several tries and concurrent psychiatric treatment. It can be a long and painful process but saves lives.

Methadone, once a “gold standard,” merely substitutes one addiction for another. There are new treatments, however, including implants. Police, in some jurisdictions, are being issued naltrexone spray to reduce overdose deaths. First responders need to have greater, easier, access to overdose medications and training in their use.

Scott’s story illustrates the anguish and despair that afflicts families across America. Heroin is no longer a big city, ghetto, problem. It’s everyone’s problem. Sometimes, the delivery men get arrested but are bailed out quickly or, more likely, replaced by others eager to earn the $300-$500 a week dealers pay.

The source of much U.S. Heroin, the Jalisco cartel decided, some time ago, that the  drug could be marketed more profitably to middle class youth than the poor and developed the sales model that featured home deliver. Drivers, generally, don’t carry guns and, in most cases, eschew violence because of the bad press that accompanies it. This doesn’t make their product, however, any less lethal than a weapon.

Catching, even deporting, small-time dealers has done little to stem the tsunami of death that afflicts all parts of the country. Neither has drug violence wracked Mexico been able to stop the trade. One of the reasons why is that users, to feed their habits, often become small time dealers themselves. Incarceration is a colossal failure because it’s as easy to get Heroin in prison.

A wall along the Southern border will do nothing to stop the epidemic. Smugglers have tunneled under border crossings and players, like El Chapo, have employed subs, fast boats, and private planes to fuel the epidemic. Homemade bazookas, helium balloons, and t-shirt cannons are preferable to “mules” strapped with drugs detected by dogs.

It’s going to take a ground, air, and concerted economic war, along with greater infiltration of distribution chains, to reduce the flow of drugs from Mexico the same way Columbian cartels were pushed back with concerted U.S. help.

Spraying Mexican poppy fields, giving financial support to farmers willing to substitute crops, enhanced policing of ports, and more DEA and Treasury Agents in Mexico are good starting points. We could, also, impose trade and financial sanctions on countries that refuse to cooperate in U.S. efforts to halt the flow of drugs. This is a better use of money than a wall. To accomplish more in the drug fight, Mexico needs to be a partner. That won’t happen if Washington sees it as an enemy. Common sense beats bluster.