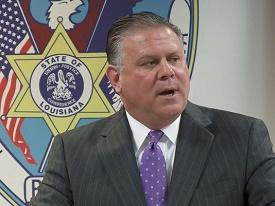 by Lawrence Chehardy
The political landscape in Jefferson Parish and statewide was shaken with the announcement by Sheriff Newell Normand that he will retire from his post as Sheriff of Jefferson Parish.  The political world does not like change, and it certainly does not like change of earthquake proportions.  The loss of Sheriff Normand throws the parish’s political landscape into chaos.

Jefferson Parish has always had strong political figures.  Back to the days of Sheriff Frank Clancy, Sheriff Al Cronvich, my father, Assessor (and later Judge) Lawrence A. Chehardy, District Attorney John Mamoulides, Sheriff Harry Lee, and Sheriff Newell Normand, strong figures dominated parish politics.  Before democrats and republicans, there was democrat verses democrat.  In the sixties and seventies, the epic political struggles between my father and the DCM (Donelon Cronvich Molere) political organization and later with DA John Mamoulides would rock Jefferson’s political world.  After a brief battle between democrats and republicans, the battlefield switched to republican verses republican.  The names changed, the organizations changed, but the political battles continued.

While the feuds and power struggles with the DCM were over the top, the battles with Mr. Mamoulides were much different.  Those battles were tough but at the end of the day my father and Mr. Mamoulides would still be friends.  They may have supported different candidates, but they remained friends.  During my tenure, we had battles too.  But we did and have remained friends to this day.  Last year Mr. Mamoulides and the Chehardy Family were both inducted into the Louisiana Political Hall of Fame.  It was a proud day for my family and a proud day to have been inducted on the same stage with John Mamoulides.

Today’s political world is much different.  Opposing factions remain that way.  It is not a healthy battle rooted in giving voters a choice.  Rather, it is rooted in deep, lasting distrust of the other side and a desire to control the outcome of every political decision that is made in parish government.

Early next year voters will have to consider who will be their next sheriff.  Of course, the natural assumption is that this should be a strong law enforcement guy.  He/she should be, but unfortunately, that is not enough.  Most folks do not realize that the office of Sheriff of Jefferson Parish is a massive job.  It may be a job bigger than running parish government where we have a parish president and a parish council.  Newell Normand has built an office that is known around the country.  He has established programs inside the sheriff’s office that are nationally recognized.  He serves on national boards dealing with homeland security and has attended numerous schools and seminars including FBI training that have prepared him to react responsibly in cases of a local or national disaster or tragedy.  Simply put his credentials after nearly forty years in law enforcement are unmatched.

In addition to law enforcement, the sheriff runs the parish jail, does tax collections, including sales and property tax collections, and serves court notices among many other duties.  Newell’s community involvement is extensive.  His involvement includes the East Jefferson Hospital Board and his Band of Excellence composed of young men and women who march at Mardi Gras time and give music concerts while learning the beauty of music, self-discipline, and the importance of personal responsibility.  The next sheriff must be able to effectively run a huge business organization that includes, among many other things, a major law enforcement agency.

Politically, Newell Normand was instrumental in the election of Governor John Bel Edwards.  Even more significant is with Sheriff Normand’s support then candidate Edwards carried Jefferson Parish in a major political shocker.  Newell’s fundraising ability is unmatched, and his political influence in parish and state politics is not to be taken lightly.

So, let’s beg the question that so many are asking.  “Why is Newell Normand giving up all this power?”  Well first off not every politician is in it for “power.”  Many are, probably too many, but some are interested in serving.  Unfortunately, these leaders are few, but they have one very strong trait - they know when it is time to walk away.  Forty years in law enforcement will take its toll sometimes witnessing carnage first hand that the public never sees.  The sheriff has the tremendous responsibility to keep the public safe, while worrying every day that his deputies on patrol will go home safely after their shift is over.  Add to that the political realities of a powerful public office, and you have a public official with a heavy burden.

Sheriff Newell Normand will retire at the end of this month.  He has a wonderful wife, two great kids, one in college and one in law enforcement, and a precious granddaughter.  This is a life worth going home to every night especially after long days on the radio speaking to thousands of listeners.  And you thought Newell was finished.  His influence in the community may soon be stronger than ever.  And knowing the political world the way he does, politicians will not be able to pull the wool over the public’s eyes anymore.

Good luck, Newell, in your retirement and new endeavor.  To paraphrase Charles Osgood: “We’ll see you on the radio.”

More in this category: « US needs Mexican partner to fight Opioids, not border wall Fax-Net Publisher Lou Gehrig Burnett, 1 of 3 new inductees into LSU Hall of Fame, Sept 14 »
back to top