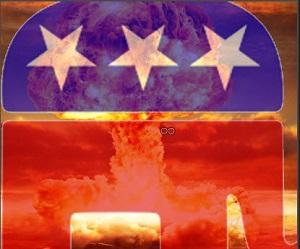 The biggest objection to the Trump Presidency wasn’t repeal and replace Obamacare. Nor was it his plan to remove us from the Paris Accord so we can test the theory that man-made climate change is a hoax. It wasn’t a useless wall, or even threats to put Clinton in jail. It wasn’t the host of dubious promises. The greatest fear was Trump’s suitability to nuke.

It’s understandable why people voted for Trump. He was the anti-establishment candidate against the ultimate insider, Hillary Clinton, seeking her turn in the Oval Office by divine right. He spoke to the disaffected in the same language heard around so many dinner tables. People believed he’d be their advocate more than his own. The towering will Trump projected, however, was a chimera and many of the accomplishments he claims are continuations of work started by his predecessors, as trend over time analyses show.

In a sign of how bad things are Trump’s new Chief of Staff, and the Secretary of Defense, both generals, agreed to make sure the President is never without one of them in close proximity. Congress has passed new Russia sanctions, all by itself, in a veto proof move, and it’s staying in pro-forma session during the August recess to prevent Trump from firing Attorney General Jeff Sessions as a way to get Robert Mueller out of his hair. What in the world is going on when the President of the United States needs constant caretakers because he can’t be trusted alone?

Senior Advisor, Steve Bannon, it was thought, would serve as a stabilizing force on Trump. Didn’t happen. Ivanka Trump, one hoped, was going to rein in impulses the President couldn’t resist. Hardly. Did Paul Ryan act as a moderating influence? Nope. What about Mitch McConnell? Nope. Has anyone convinced the President that the office he holds is bigger than himself, his big victory, or ginormous crowds? Sadly, no, and now Trump, people are starting to realize, can blow the world up as quickly as he tweets when the mood strikes in the early A.M. Not comforting!

North Korea, already, has nuclear weapons. Act accordingly, like it or not. Engage instead of blowing the planet up. They’re not the only hostile power that can bomb the White House and there’ll be even more. The conflicting stories out of Trump’s mouth, about most everything, inspire no trust. What’s wrong with President Pence, or even Ryan? The conservative agenda is bigger than any one man. Even Trump’s most ardent supporters must know this, but if they wait much longer the North Korean fiasco might just be a dress rehearsal for how we end. Is Trump worth it?