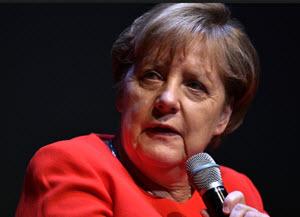 No doubt the rhetoric has gotten hotter with the recent eyeball to eyeball game of chicken between North Korea and the United States.

If anybody wonders if anyone is watching, think again.

Certainly, the world leaders are chiming in strongly suggesting that both North Korea and President Trump lower the temperature.  In fact, one of the major voices appears to be telling North Korea that should it engage in a first strike, it is on its own, yet, telling Trump it will defend its ally should it hit North Korea first.

How are comments such as Trump’s “fire and fury”, “lock and loaded” playing out on the world stage? Here are some of the statements from Germany, Russia, New Zealand and China.

“I consider an escalation of rhetoric the wrong answer,” Merkel said at a press conference on migration in Berlin. “I do not see a military solution to this conflict.”

Trump’s comments, made Tuesday from his club in Bedminster where he is taking a working vacation for much of August, “are not helpful in an environment that is very tense,” New Zealand Prime Minister Bill English told reporters Wednesday, according to the New Zealand Herald. He said he would convey his concern about Trump’s comments to the president should they continue.

“I am worried those comments are not helpful when the situation is so tense, and I think you are seeing reaction from North Korea that indicates that kind of comment is more likely to escalate than to settle things,” English said.

China won’t come to North Korea’s help if it launches missiles threatening U.S. soil and there is retaliation, a state-owned newspaper warned on Friday, but it would intervene if Washington strikes first.

The Global Times newspaper is not an official mouthpiece of the Communist Party, but in this case its editorial probably does reflect government policy and can be considered “semiofficial,” experts said. …

In an editorial, The Global Times said China should make it clear to both sides: “when their actions jeopardize China’s interests, China will respond with a firm hand.”

“China should also make clear that if North Korea launches missiles that threaten U.S. soil first and the U.S. retaliates, China will stay neutral,” it added. “If the U.S. and South Korea carry out strikes and try to overthrow the North Korean regime and change the political pattern of the Korean Peninsula, China will prevent them from doing so.”

"Unfortunately, the rhetoric in Washington and Pyongyang is now starting to go over the top," Lavrov said at a forum for Russian students, according to Reuters. "We still hope and believe that common sense will prevail."

When asked if he believes the current standoff could lead to a military conflict, Lavrov said, "The risks are very high, especially taking into account the rhetoric."

Tensions between the U.S. and North Korea heightened this week after it was reported North Korea successfully miniaturized a nuclear weapon to place on a ballistic missile.

More in this category: « GOP candidates Davis, Riser pumped with life-after-Treasurer seat queries Waguespack says LABI's scorecard might surprise you »
back to top