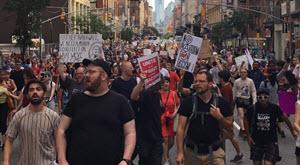 No faithful citizen advocates violence and those who do are, rightly, labeled as subversives and terrorists. Think what you want. Say what you want. Dress to please yourself. Associate with whomsoever you like, and protest when it’s pleasing, but do not raise your hand against another, except in self-defense. Those are the rules. The perpetual dilemma, in legal terms, is determining who started the fight.

The lawsuits sure to arise from the Virginia confrontations will prove, once again, how delicate free speech is in a democracy. Our tradition, even when it leads to dark expression, is that everyone can talk. If elements of either the right, or left, however, are permitted to prevent the expression of the other, or anyone in between, damage is done to a precious national characteristic.

In 1978, the same ACLU that protected Civil Rights marchers on freedom of speech grounds, inter alia, sought court protection for neo-Nazis planning a march through the suburbs of Skokie, IL, a town populated with many Holocaust survivors. The march, subsequently, was substituted with a rally in another location but the ACLU’s argument remains relevant and, that is, protecting some types of speech means those with more exquisite sensitivities may be offended. It’s a burden we bear.

The Daily Worker newspaper, published in New York City, was once the voice of the Communist Party USA. It hewed, faithfully, to a Stalinist line, though it added sports and arts coverage, at one point, in a bid to increase a circulation that never exceeded 35,000. Cities, understandably, weren’t thrilled at the sight of “Commie” racks displaying the Worker but courts disagreed with municipal bans and permitted its continued distribution.

Virginia officials are angry that outsiders came to Charlottesville to protest a statue’s removal but the 1st Amendment doesn’t limit political speech to the particular locale where one resides. The term “outside agitators” was popular during the Vietnam era to describe protesters who travelled from place to place in opposition to the war. They were, sometimes, confrontational, just as the establishment that opposed them, but their speech was no less protected.

That the violence in Charlottesville stemmed from a plan to remove Robert E. Lee from a park would be anathema to the Gentleman General who was so regarded by the Union that the tender of his sword was refused at Appomattox. Criminal courts will determine who’s responsible for the mayhem in Charlottesville and determine if it was premeditated. It’s, also, their job to protect protesting voices of even the most unpopular among us. One reason is eminently practical. Violence to speech often begets even greater violence by those shushed.