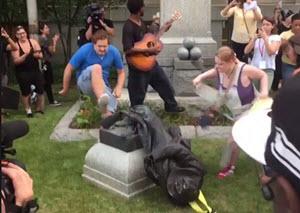 In the aftermath of the April 19, 2015 death of Freddie Gray in Baltimore, Maryland, then Mayor Stephanie Rawlings-Blake gave a press briefing and admitted that she ordered police to give protesters space to “destroy.” Of course, the result of that reckless decision was that over 350 businesses were damaged, looted or burned and a riot flamed out of control for days.

Blake’s poor judgment should not have been an example for any of our nation’s leaders. Unfortunately, in recent days, Americans have witnessed political and law enforcement leaders making similarly questionable decisions.

In Charlottesville, Mayor Mike Signer needs to be held largely responsible for the horrible violence that occurred in his city on Saturday. According to the ACLU, the police were ordered to “not intervene until given command to do so.” As a result there was a violent confrontation between far right protesters, including neo-Nazis and KKK members, and far left protesters, including communists and Antifa (anti-fascist) radicals.

For some unknown reason, the police shut down the “Unite the Right” rally, but led those protesters directly into a large group of leftist protesters. As the police watched, predictable violence erupted, culminating in the death of an innocent woman and a vicious attack on a reporter. In total, over 20 people were injured and numerous protesters were eventually arrested. A more active and vigorous police presence would have kept bloodshed to a minimum.

On Monday in Durham, North Carolina, there was another display of police inaction. As a throng of leftist protesters gathered around a Confederate monument, a 22 year old woman, Takiyah Thompson, climbed a ladder and attached a rope around the neck of the soldier. Thereafter, the mob pulled the statue to the ground and proceeded to spit, kick and make obscene gestures toward the fallen Confederate soldier. A major celebration ensued as the police were nowhere to be found.

As this act of vandalism proceeded, police did nothing but videotape the event. Of course, police could have intervened to protect this valuable piece of public property, but they decided to take no action. Thus, a monument that had stood since 1924 was toppled not by a vote of the people, the local city council, the state legislature or any judicial decision, but by the will of an enraged group of leftist activists.

Yesterday, Ms. Thompson, the main instigator of the monument removal, was finally arrested. She was charged with a variety of crimes including inciting others to riot, participation in a riot, damage to real property and disorderly conduct.

Thompson is a member of the World Worker’s Party, a communist organization, which is heavily involved in the anti-Trump and anti-Confederate monument protests around the country. Unfortunately, the arrest was made after she had already committed a crime and destroyed the monument. Police should have protected the monument and prevented such a crime from occurring. Regardless of one’s feelings about the monument, destroying it was a criminal act.

Evidently, Thompson and her leftist colleagues do not care about law and order. According to Thompson, “The people decided to take matters into our own hands and remove the statue. We are tired of waiting on politicians who could have voted to remove the white supremacist statues years ago, but they failed to act, so we acted.”

The “Alt-Left” is on a mission to remove any vestiges of America’s “racist” past. We can expect these Antifa protesters to target other monuments to Confederate heroes or slave owning Founding Fathers in the days ahead. Will police and political leaders continue to sit idly by while such crimes are being committed? If so, they will just be encouraging more violence, not trying to stop it.