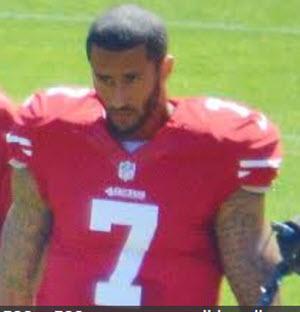 As the NFL gets ready to begin another season, it seems that the national anthem protest is expanding. Last night, in a preseason game against the New York Giants, approximately 12 Cleveland Browns players kneeled during the singing of “The Star-Spangled Banner,” our national anthem. The purpose of the sideline demonstration was to show their opposition to police brutality and racial injustice in America today.

It follows the anthem protest that was started last year by then San Francisco 49ers quarterback Colin Kaepernick, who is currently unemployed.  Last year, Kaepernick used a variety of ways to protest the anthem, eventually kneeling while other players were standing in tribute. Kaepernick said that the protest was because he did not want to “stand up to show pride in a flag for a country that oppresses black people and people of color."

Some NFL observers believe that the Kaepernick protest was one of the major causes for the television ratings to decline last year. Jason Whitlock, sports commentator, opposed Kaepernick’s protest for another reason, blasting the “stupidity” of the yearlong campaign. According to Whitlock, “There are NFL players, black and white, who know that if you really want to address police brutality, social injustice, inequality in this country, protesting the national anthem is the perfect way for your message to get completely lost.

Whitlock also stated that NFL players are afraid to condemn Kaepernick’s behavior because of the potential “backlash” from social justice activists. For example, journalist and Black Lives Matter leader Shaun King is encouraging a boycott of the NFL until Kaepernick is added to one of the teams for the upcoming season. In a column, King wrote that he will not “be watching the NFL this year…I can’t, in good conscience, support this league, with many of its pro-Trump owners, as it blacklists my friend and brother Colin Kaepernick for taking a silent, peaceful stance against injustice and police brutality in America.” King said that the response to Kaepernick by NFL owners was pure “racism. It’s bigotry. It’s discrimination. Period. It’s not football. Don’t call it football.”

King failed to mention that while Kaepernick might have posted good statistics last year, he only led his teams to one victory. NFL owners might also be looking at the fact that Kaepernick is clearly a divisive player who would definitely distract teammates from their focus on the game.

In the NFL of 2017, owners must also deal with the fact that there are plenty of players who share Kaepernick’s political activism. In Seattle, Seahawks defensive end Michael Bennett recently refused to stand for the national anthem. This led his brother, Green Bay Packers tight end Martellus Bennett, to announce, “I support him, I support his movement, I support Colin Kaepernick, I support all the guys, Angela Davis, all the people that came before us to pave the way for what we're trying to do in the black community." Martellus Bennett also noted that he will “always will be very pro black."

It is interesting that Bennett cited as a hero Angela Davis, an avowed communist, and noted his “very pro black” attitude. A similar view from a white football player would be condemned as totally racist. In contrast, Bennett’s comments were practically ignored by the media.

Whether the anthem protests and leftist political beliefs of an increasing number of NFL players damage the popular brand that has been cultivated for so long remains to be seen. If ratings drop again this year, last year’s problem may turn into a long-term trend and the country’s most successful professional sports league may finally be forced to act decisively.