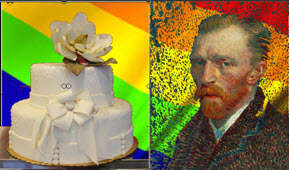 The U.S. Supreme Court just heard arguments in MASTERPIECE CAKESHOP, LTD., ET AL., vs. COLORADO CIVIL RIGHTS COMMISSION, a case that will determine if bakery shops will be required to make wedding cakes for homosexual couples. The resulting decision is bound to be divisive and, once again, Justice Anthony Kennedy, likely, will be the determining vote.

Appellants contend the 1st Amendment is violated when bakers are forced to create works of art for people who hold alien beliefs. What they urge revives debates over the disallowed “We Reserve the Right to Refuse Service to Anyone,” and “No children, No Pets,” Civil Rights Act violations. Historically, artists have been free to choose their own clients, though Pope Julius II forced Michelangelo to paint the ceiling of the Sistine Chapel. Julius was the last Pope to wear armor and lead his troops in battle, however, so he generally got his own way.

Free exercise claims are, also, made by the Appellants, namely, that they can’t be required to be a part of, or lend support to, any activity offensive to their sincerely held religious beliefs. The operative word here is “sincerely.” The Little Sisters of the Poor, recently, prevailed in a case that considered the Affordable Care Act’s requirement that companies, including Catholic institutions, must extend reproductive services to individuals they employ. The Court recognized the Sisters’ religious beliefs and exempted them from this coverage mandate.

Application of the sincerely held beliefs standard urged by these Appellants is troubling. Everyone has beliefs. It’s impossible, however, for anyone to know the true depth of another’s beliefs, and whether or not they’re situational, or select. Something more than a mere assertion is required. The Little Sisters of the Poor are an IRC Section 501(c) corporation; Masterpiece Cakeshop is not. Though not determinative, this goes to the weight of Appellants’ argument.

The sincerely held belief test relies on a high degree of subjectivity when applied, necessitating additional facts. Here, Appellants said they’d sell homosexuals anything, except for wedding cakes. This tends to show less than a full commitment to their core beliefs. Objections to solemnification of gay unions, specifically, can be based, only, on opposition to homosexuality, generally. Due process, and equal protection, demand more than hurt feelings to abridge another’s rights to obtain goods and services freely available to others.

Appellants’ claims to artistic expression are more interesting from a legal standpoint since they depend on a determination as to when, and if, a cake can be deemed “a work of art” in more than a colloquial sense. The U.S. Copyright Office protects literary works and tangible artistic expressions. These, however, must be in permanent form. Because cakes are meant to be consumed, and mold if they aren’t, this fact militates against the permanency requirement.

The methods and materials Appellants use to make their cakes are fairly uniform,( i.e., water, sugar, flour, eggs, oil, and heat) and it can’t be said that any novel method of artistic creation is utilized. On this basis, patent protection is, similarly, unavailable. While a design used to decorate a cake may be copyrightable, if unique, that only protects impermissible copying. It takes more than colors, swirls, flowers, and people on top to turn a wedding cake into art.

More in this category: « HILLYER: Republican National Committee should disband due to its Roy Moore support Republicans relieved Roy Moore won't horse around US Senate »
back to top