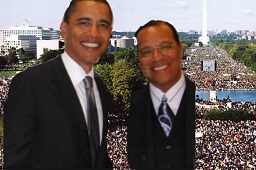 In 2005, then U.S. Senator Barack Obama (D-IL) met with the Congressional Black Caucus along with Nation of Islam leader Minister Louis Farrakhan, a certified racist, homophobe and anti-Semite.

Obama’s meeting with Farrakhan was photographed by journalist Askia Muhammad.

It showed both of them smiling, surrounded by happy members of the Farrakhan entourage, including his son-in-law, two sons and Reverend Willie Wilson, Executive Producer of the Million Man March program.

After the photo was taken, Muhammad was confronted by a representative of the Congressional Black Caucus who asked that it not be published. Obviously, it was soon realized that the association with Farrakhan could be devastating to Obama’s political career. Eventually, Muhammad gave the photo to Farrakhan’s staff, but only after keeping a copy for himself.

For 13 years, Muhammad kept this explosive photo hidden because he was convinced that “it would have made a difference” in Obama’s presidential campaign.

Thus, this reporter engaged in a cover-up to assist the presidential aspirations of a candidate he supported, not exactly a ringing endorsement for fair and balanced journalism.

In fact, the only reason Muhammad is releasing the photograph now is that he received permission from Farrakhan to include it in his new self-published memoir.

Muhammad revealed that the photo was taken after Obama engaged in a “warm conversation” with Farrakhan, a “constituent and fellow Chicagoan.”

It is not surprising that the two men were acting like such buddies. Obama did attend Sunday services for many years at Trinity United Church of Christ, led by Reverend Jeremiah Wright, a racist, anti-Semite and anti-American pastor. Wright married Obama to his wife, served as his spiritual mentor and was the inspiration for his book, The Audacity of Hope.

Wright also felt a close affinity for Farrakhan and his church’s magazine gave the Nation of Islam leader a “Lifetime Achievement” award. He made some controversial trips with Farrakhan, including a 1984 visit to Libya to meet with dictator Muammar Gaddafi and a 1986 excursion to Syria to help negotiate the release of an American held hostage.

Since Wright and Farrakhan were close and powerful figures in Chicago, as a Democratic politician, Obama was involved with both of them. He attended the “Million Man March” in Washington D.C. in 1995, sponsored by the Nation of Islam. In addition, according to former Nation of Islam executive Dr. Vibert White, Obama and Farrakhan would “show up at events together.”

When Obama ran for President in 2008, he was endorsed by Farrakhan, who called him the new “messiah.” While Obama denounced Farrakhan’s controversial comments, he did not reject his endorsement or personally criticize the Nation of Islam leader.

During the campaign, Obama moved away from Wright, Farrakhan and another controversial associate, former terrorist Bill Ayers. Of course, the media gave him a pass for these troubling friendships while Democrats denounced as racist any Republican who raised concerns about the closeness of these individuals to Obama.

With the release of this photo, all of the fears expressed by so many Republicans have been validated. Obama and Farrakhan were not strangers, they shared some of the same beliefs. If Americans would have been fully aware of this relationship and this photo had been published 13 years ago, Obama may not have been elected President and the country would have been spared eight years of misery.

Sadly, a journalist placed his political preferences over his duty to report the facts. He participated in a cover-up that has finally been exposed. It is too late to undo all of the damage caused by President Obama, but it is never too late to finally learn the truth.