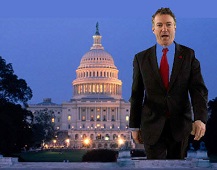 Thank God for U.S. Senator Rand Paul (R-KY). At least there is one politician in the United States Senate who is concerned about deficit spending. Last night, he led a lonely filibuster against a two-year $400 billion spending bill that balloons the budget and massively increases the federal debt.

Paul continued the fight past midnight, forcing a very brief government shutdown, and providing much-needed attention to the spending habits of our federal government.  On the Senate floor, Paul, revealed the real problem was “Republicans hand-in-hand with Democrats offering us trillion-dollar deficits.” He said that the goal of the protest was for “people to feel uncomfortable" supporting such a huge spending bill.

Joining Paul in opposing the deal were some conservatives such as House Freedom Caucus Chairman, Representative Mark Meadows (R-NC), who said the legislation “expands government spending well beyond the caps, by almost 15%.” Meadows noted that as a candidate he promised his North Carolina constituents to “work to cut government spending,” not support wasteful government spending. According to Meadows, “We have to do better.”

In the wee hours of the morning, the budget deal easily passed both the House and Senate as it was strongly supported by House Speaker Paul Ryan (R-WI) and Senate Majority Leader Mitch McConnell (R-KY). Later in the morning, the President signed the bill focusing on the additional military spending that is undoubtedly needed. Nevertheless, the President tweeted that “we were forced to increase spending on things we do not like or want.” In exchange for the increase in military spending, Congress agreed to an additional $131 billion in domestic spending. While supporting the bill, President Trump noted that it included “much waste” to secure needed votes from congressional Democrats.

As a result of this bill, the budget caps instituted in 2011 are history and there will be $300 billion in new military and domestic spending and $100 billion in “emergency” spending to provide relief to victims of recent hurricanes and natural disasters.

Thus, even though there is a Republican President and a Republican Congress, there is no change in the “tax and spend” policies in our nation’s capital. This will undoubtedly anger many conservative voters throughout the nation who worked tirelessly to give Republicans control of the House in 2010 and the Senate in 2014. Republicans were not put in charge of Congress to keep the same policies in place. The GOP was given the reigns of leadership to institute needed reforms and make critical changes to the “politics as usual” system that created so many problems in our country. Sadly, the “deep state” forces within the bureaucracy make any sort of real change especially difficult, if not impossible.

With such a consequential mid-term election later this year, the stakes for the Republican Party could not be higher. If the base of the GOP feels betrayed and stays home for the mid-term elections, the result for the Republican Party will be catastrophic. Surely, they will lose control of the House and radical leftist Nancy Pelosi (D-CA) will become the next Speaker. This means a far-left agenda and probably a vote to impeach President Trump next year. Consequently, it is incomprehensible that such a bloated budget bill was endorsed by GOP leadership as the impact for the 2018 mid-term elections may be disastrous for Republicans.

Congratulations to Senator Paul, Congressman Meadows and the few conservatives who voted with them in an effort to highlight the hypocrisy of GOP congressional leaders who campaign as conservatives but govern as liberals.

More in this category: « Obama, Farakkhan picture paints one million men words Reasonable gun control deserves our thoughts and prayers »
back to top