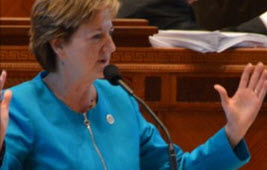 “Sexual harassment in state government will not be tolerated. Upon learning of these recent allegations, Gov. Edwards immediately launched an investigation that is currently underway. Previous investigations regarding sexual harassment claims against a former employee did not conclude any wrongdoing. However, this administration takes this matter seriously, which is why the governor acted so quickly. The investigation that is currently underway will review the state’s policies regarding sexual harassment, not just within the executive branch, and we will work with Sen. Hewitt and the entire legislature to promote a safe, positive work environment for all state employees.”

Hewitt’s prior letter said, in part:

Sexual harassment has no place in state government or in the private workplace. All people have the right to work in a safe environment, without unwanted sexual advances or pressure to trade sexual favors in exchange for job security or promotions. The recent national news of men in power using their positions to sexually harass female subordinates has given women around the country the courage to speak out. Similarly, in Louisiana, one or more women have accused a key member of Governor Edwards’ staff of sexual harassment. Surprisingly, this gentleman was previously accused of harassment while employed by the state in a high-profile position in Governor Blanco's office and serving as chairman of Southern's Board of Supervisors. Given these troubling events, I am requesting that your office perform a performance audit to examine our state's policies and procedures involving sexual harassment, in accordance with the authority granted you in RS 24:513.0(4).

The scope of the performance audit should include: