Talking heads' take on the Biden-Harris vs. Trump-Pence match 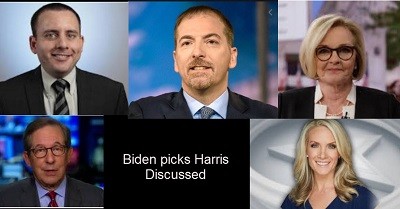 It's official!! The US presidential race pitts the challengers Joe Biden and Kamala Harris vs. incumbent Donald Trump and Mike Pence.

Today, only days leading up to the Democratic convention, Joe Biden announced his running mate.

Shortly after the announcement,  we wanted to see what the talking heads were saying about the match up. Below is a transcript of a portion of the Daily Meet the Press with Chuck Todd as host. Following that is Dana Perino and Chris Wallace from Fox News