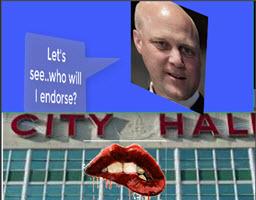 There are 25 days until the voters of New Orleans decide the top two candidates in the crowded race for Mayor of New Orleans. There are currently 18 candidates running for Mayor; however, most analysts have concluded there are three clear front-runners: Councilwoman LaToya Cantrell, Former Judge Desiree Charbonnet and Former Judge Michael Bagneris, all Democrats.

A new survey on the New Orleans Mayor’s race by respected pollster Verne Kennedy shows a three way dead heat among the top candidates. What will separate these front-runners in these final days of the campaign?

Of course, one major factor will be the size of the campaign war chest. Right now, Desiree Charbonnet is the clear leader as she entered the race with an eye popping $870,000 in the bank.

Another factor may be who secures the major endorsements. It seems that Congressman Cedric Richmond (D-New Orleans) is set to endorse Charbonnet at some point. She also has the endorsement of the Orleans Parish Republican Party Executive Committee. However, Judge Bagneris has secured the important endorsement of the Alliance for Good Government, which has a very high approval rating from voters.

In the days ahead, the major newspapers will make endorsements, as well as the current Mayor, Mitch Landrieu. Until now, the campaign has been a relatively sleepy affair, but voters are finally waking up to the fact that there will be a new Mayor in 2018.

Landrieu will leave office having two controversial terms as Mayor. His divisive tenure has not lived up to the lofty expectations of his supporters. With problems galore and an agitated citizenry, it would seem his endorsement will be quite risky for his favored candidate.

Of course, he will be able to direct funds to the candidate of his choice and that is surely worthwhile; however, he will also deliver loads of baggage that may very well undo the hopes of his chosen successor.

From the very controversial decision to remove Confederate monuments to his inaction as President of the Sewerage and Water Board, Mayor Landrieu has a large number of critics. There are also ongoing concerns about crime, street conditions, the homeless population, education, blight, drugs, unemployment and the overall state of the economy.

During Mayor Landrieu’s tenure, the population of New Orleans grew initially, but has recently contracted. It is easy to see why the city has had problems. Of course, the violent crime rate is a major disincentive in moving to New Orleans, but there has also been little to no action to grow our major industries. For example, the film industry has left New Orleans in droves in recent years as the state tax credits have been curtailed. Also, there have been continual cutbacks in the oil and gas industry, a driving force in our economy. The promise of a booming healthcare industry has not been realized, while the high tech industry has some promise, but not much to show as far as real job growth.

There have also been periodic announcements of companies leaving the city for greener pastures. Yesterday, Be Well Nutrition announced it was leaving New Orleans for Santa Monica, CA to be closer to funding sources. The company started in New Orleans, but will experience its real growth in another state, a typical story.

Overall, the mayoral candidates need to consider the real value of Landrieu’s endorsement and examine whether it is worth the risk. At this point, it seems clear the best road forward for New Orleans is to make a clean break from the policies of Mitch Landrieu. Receiving his endorsement would remind voters of a contentious and disappointing past and not of a hopefully brighter future for New Orleans.