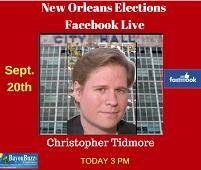 These are just some of the issues New Orleans and others seek inside information and political perspectives. Today, Christopher Tidmore, long-time political writer for The Louisiana Weekly and radio talk show host is going to share his insights on Bayoubuzz’s Facebook Live along with Publisher and attorney, Stephen Sabludowsky.

The program starts at 3 PM today, at 3PM.

Tidmore has been a reporter for WRNO radio, talk show on WTIX and currently

Below are excerpts from some of his recent pieces on The Louisiana Weekly:

None of these positions particularly alienate their African-American base constituencies, and in all but Michael Bagneris’ case, might actually prove popular with some middle-class Black voters. Still, the break from the normally liberal discussion points in an overwhelmingly Democratic city underpins a political truth.”

Sixteen years ago, the City of New Orleans was awash in controversy over the effort to “privatize” the Sewerage and Water Board. In actually, the then-S&W Board and the Morial Administration never intended to sell the material asserts, but to have a private operator run the system for 30 years. The concept died amidst colossal political rancor.

When Mayor Mitch Landrieu proposed hiring a private company to provide a third-party analysis of the problems of—and the challenges facing—the city’s water management system, some members of the Mayor’s senior staff privately suggested that the likely analyst, Veolia Water Technologies, could simply transition into the private management of the Orleans Sewerage and Water Board.

How can you watch this timely Facebook Live event?  You can watch it live on Bayoubuzz.com or on this event page or

If you watch it live on Facebook or even watch it after the show is completed, you can make your comments or ask questions.  Also, a toll free phone number will appear on the screen and you can call and communicate with the panel.

Don’t forget to share with others who might have an interest in watching Christopher Tidmore field these important questions.

What questions do you have about the New Orleans Mayor's Race, Council elections? Ask them or comment below