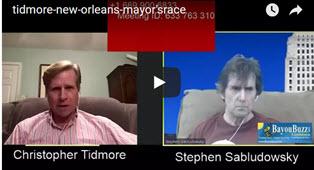 If you’re looking for a good summary of the candidates, the background players, the organizations, the New Orleans election history, just contact political reporter, Christopher Tidmore.

On Wednesday, via Facebook Live, I discussed the New Orleans Mayor’s race and New Orleans elections with Tidmore, who writes for The Louisiana Weekly and who hosts a radio show locally.

Tidmore said the election “couldn’t be more interesting”, in part because, there is so much certainty as to which two of the three top candidates will make the runoff. Tidmore believes that given the polls, three candidates, Desiree Charbonnet, Latoya Cantrell and Michael Bagneris are essentially tied with roughly half of the city uncertain as to whom they will support.

Below is the first part of the interview, in the form of the transcript. If you want to see more of this segment, kindly slide the video to the 2:43 mark.

Roughly, for the next six minutes, you can hear Tidmore discuss issues such as:

The millennial vote, particularly the "hipsters" who have moved into New Orleans post-Katrina;

Cantrell's efforts in going after the youth vote;

Who Bagneris is attracting;

The role of Frank Stewart;

Comparing this election to that of Ray Nagin

Here is the transcript of the first part of the interview which text goes up to the 2:43 on the Youtube video.

Some show Charbonnet first, some show Bagneris first--one shows Cantrell first--but what's interesting in this whole dynamic is-- in many ways, not only the appeal for the undecided vote, which is massive, we're talking about nearly half the electorate and almost all the polls--but also the appeal for the youth vote, which honestly we've never really seen a focus weigh in election.

You see Latoya Cantrell in particular making massive appeals to Millennials a lot of her meet-and-greet events are based on places like Ale and Oak on Oak Street and others trying to appeal to this demographic.  And some of the tumultuous stuff that's happened in the mayor's race recently, Steve, including a rather negative series of ads were in many ways not just trying to attack Desiree Charbonnet, but in a way trying to dissuade, we can explain why, some of the youth vote that may have been trending in her direction.

I will tell you this--it's an exciting race.  No one knows who is gonna be in the runoff, it could be any of these three people. It's based on a few factors where the Republican and white votes going to be, what is, what turnout dynamics are going to be, and most importantly, you know if anything goes wrong in the final stretches but it's probably the--I can't remember a mayor's race where you didn't know at least who for sure who one of the runoff candidates was going to be,  and you literally I can tell you--you're not sure.

Of course the other wildcard is the fourth runner in this race Troy Henry. Troy Henry at this point likely will not be a runoff candidate.  But what he could be as a kingmaker.  He's pulling depending upon the polls between 4 and 7 percent, some say as high as 9.  What he has done is-- he's got a core of support that otherwise go to one of the other candidates and it's fluctuating as to who.  The most natural person he would be drawing support away from is Michael Bagneris.  They appealed to a lot of the same demographics-- pro-business, pro economic development, so on and so forth-- but there's also his vote is impacting Cantrell, in some lesser extent Charbonnet.   So it is if he rises this could put everything on another bend and we frankly don't know what's gonna happen in the next two weeks.