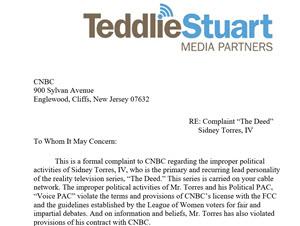 If you never thought the ongoing political circus between New Orleans Mayoral candidate Desiree Charbonnet and businessman Sidney Torres could ever get any more bizarre, brother, you are mistaken. It has.  Judging from developments in the past week, expect more media explosions and disruptions.  Things are going to get worse as election day creeps near.

The Charbonnet campaign has just launched a public relations scud missile upon its new public rival, television personalality Torres-- claiming violation of contract and law. This latest salvo will surely raise the heat so much higher and the flames somuch brighter upon a New Orleans Mayor’s race that has otherwise lackied in spark.

The sideshow is clearly the most exciting game in town.

Last week, Charbonnet pulled out of the forum sponsored by Torres.  Charbonnet claimed that she did so because there were ethical concerns that she has not heretofore detailed. Torres responded by threatening to run TV ads against her and in fact, has done so.

Yesterday, the brawl between the two turned even uglier making claim and cross claims about their respective alleged relationship with disgraced and imprisoned former New Orleans Mayor, C. Ray Nagin.

Today, the Charbonnet forwarded the below press email along with a copy of a letter sent to CNBC and to the FCC. Here is that coverletter followed by the actual dispatch to CNBC and the federal government.

How much publicity is too much? For Sidney Torres, the answer has traditionally been that there can never be too much time in front of the camera. But his intense political activities violate FCC rules, and are now receiving new scrutiny. The Desiree Charbonnet campaign has filed a formal complaint with CNBC, where Torres is a reality TV personality, and sent a copy of the complaint to the FCC.

“This election is too important for the future of New Orleans to let a reality TV star hijack it for personal gain,” said Kevin Stuart, Charbonnet campaign senior media advisor. “Sidney Torres has already made too much money and garnered too much fame on the backs of the people of New Orleans. Now he’s violating the law.”

A copy of the letter sent to the FCC is attached. The package included substantiating materials: links to Voice PAC’s advertisements, news articles about Voice PAC’s activities, and the press release from the Charbonnet campaign detailing its withdrawal from Voice PAC’s forum.

Here is the letter to CNBC:

RE: Complaint “The Deed”

To Whom It May Concern:

This is a formal complaint to CNBC regarding the improper political

activities of Sidney Torres, IV, who is the primary and recurring lead personality

of the reality television series, “The Deed.” This series is carried on your cable

network. The improper political activities of Mr. Torres and his Political PAC,

impartial debates. And on information and beliefs, Mr. Torres has also violated

provisions of his contract with CNBC.

The televised debate sponsored by Sidney Torres, IV and his “Voice PAC”

was held on Wednesday, September 27, 2017. Four candidates in the Primary

Election scheduled for October 14, 2017 were invited to participate in the debate.

The candidates are Desiree Charbonnet, LaToya Cantrell, Michael Bagneris and

Desiree Charbonnet agreed to participate in the debate after representatives

journalists who would ask questions of the candidates.

Within 24 hours of the scheduled debate, two of the mutually agreed upon

journalists dropped out the debate. One was a journalist from WVUE-TV, the local

FOX affiliate station and the other journalist was from WDSU-TV, the local NBC

the stations about the debate.

When Ms. Charbonnet learned of the withdrawal of the two respected

journalists from the debate, she also withdrew. (See attached statement.)

The debate proceeded with three candidates and an empty podium reserved

which prompted the remaining three candidates to criticize Ms. Charbonnet during

After the debate, Mr. Torres threatened to spend $200,000 on television ads

October 1, 2017 during a NFL football game. More ads are scheduled to air during

Mr. Sidney Torres’ actions during and following, the debate of September

violation of FCC rules and regulations governing cable and TV broadcasting. His

Because of Mr. Torres’ improper and retaliatory political activities, his

Senior Media Advisors to the Charbonnet for Mayor Campaign Committee