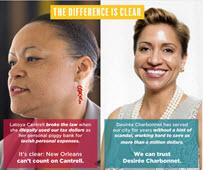 When one is down 9-points or so, with three weeks left to go until the final round-- the New Orleans Mayor’s race runoff elections--what are your options?

You jab here and there until you can swing the uppercut.  That’s what Desiree Charbonnet appears to be doing lately.

Not that she has not taken her share of hits from outside groups such as NotForSaleNOLA and Sidney Torres’s Voice PAC who spent hundreds of thousands of dollars to destroy the Charbonnet mayoral race chances.

So far, her opponent, LaToya Cantrell, since the primary election advantage, has picked up endorsements from Michael Bagneris who earned the third spot.  While he has little African American support (single digits), he received just under 30 percent of the non-black support, which Charbonnet certainly needs and which Cantrell could use, since the latter’s non-black support equaled her African American vote.  Cantrell recently picked up the Alliance for Good Government tag. Charbonnet scored with the New Orleans Tribune backing.

But, like a boxer, looking for an opening, one can tell she’s eyeing for some blood opportunities.

Charbonnet might have found one with the recent revelation that Cantrell has reimbursed the New Orleans for $8,950 in expenses, including a lump sum of $4,433 just after she qualified for mayor.

And, the last thing any candidate, such as Cantrell, needs would be a controversy that slows down the big ‘mo and that gets into the area of government ethics

Might this be one of those that turns the campaign towards Charbonnet?

Certainly, she must hope so. And pushing the reimbursement story is a chance to get in a lick, which is clearly what she is doing.

In Cantrell’s behalf, it might be sloppy record keeping and nothing more. You can also lay odds that the New Orleans City Councilwoman will do some counter-punching on her own.

Which gets us to the question—might the election trend change now that the combatants are going one on one, nose to nose, eyeball to eyeball?

During the general election, the only candidate really taking any hits was Charbonnet.  Cantrell pretty much got a free ride, totally unscathed, as multi-candidate contest makes it difficult to focus on any one target.

Just as Cantrell reimbursed the city, now the Charbonnet will try to pay back for those slams against her, even if there is no real evidence that Cantrell was doing any of the body punches.

So, there’s the bell.  Will one be down for the count? Or, perhaps a win on points?