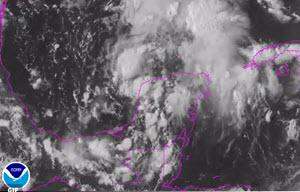 New Orleans certainly would prefer to be in better shape as Tropical Depression Harvey moves towards Texas.

Landrieu tweeted, “We are watching systems in/near Gulf very closely and have entire team preparing just in case. No reason to panic

The storm comes at a moment that the Mayor’s office, New Orleans, the Sewage and Water Board is still reeling from a recent flooding disaster which has left the city vulnerable.

The city is still operating with 15 out of 200 drainage pumps out of service although the Sewage and Water board and private contractors work to fix broken pumps and turbines.

Mayor Mitch Landrieu has stated the city’s drainage system will remain in a weakened state until vital repairs are made.

Also on Tuesday as a result of the recent flood chaos, Landrieu and the Sewerage & Water Board (S&WB) announced an Interim Emergency Management and Support team, which will provide administrative, financial and technical capacity to the S&WB through November 30, 2017, the end of Hurricane Season.

The team will include:

Tweets about new orleans harvey TALK ABOUT THE ISSUE BELOW