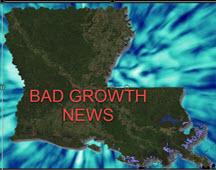 Louisiana’s cities are not growing as well as some of the other states over the past seven years. The fastest growing, according to Wallet Hub, is New Orleans, ranked 168th. Lake Charles 216, Metairie 266, Lafayette 396, Baton Rouge 510, Shreveport 515.

Worse, Baton Rouge (246) and Shreveport (249) are ranked at the very bottom for mid-sized cities with the lowest growth.

In terms of job growth, Shreveport ranked towards the very bottom, tied for 494th with Decatur Illinois.  Lake Charles (514) and Shreveport (515) hit the rock bottom with lowest poverty rate decrease, while Shreveport and Lafayette were ranked in the worse five for Regional GDP.

In the categories, New Orleans, ranked 168th overall, had a 66 score for socioeconomic rank but a 363 score for jobs and the economy.  The lower the score, the better.

With economic growth expected to slow in the short term after a devastating hurricane season, the personal-finance website WalletHub conducted an in-depth analysis of 2017’s Fastest-Growing Cities in America.

To determine where the most rapid local economic growth occurred over a period of seven years, WalletHub’s analysts compared 515 U.S. cities across 15 key metrics. The data set ranges from population growth to college-educated population growth to unemployment rate decrease. In addition, we produced a separate ranking by city size.

To view the full report and your city’s rank, please visit:
https://wallethub.com/edu/fastest-growing-cities/7010/