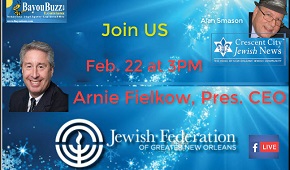 He left his heart in New Orleans. Welcome back, Arnie.

We missed you, but we’re so glad you’re home.

Arnie Fielkow, or in some quarters, the “man who saved the New Orleans Saints”, is back to his adopted city, New Orleans, after a stint as the President and CEO of the prestigious organization the National Basketball Retired Players Association. Fielkow, as you recall, stood up to Tom Benson after Hurricane Katrina almost blew our beloved New Orleans Saints out of Louisiana to a foreign land, forever.

After leaving the Saints and prominent position of the Executive Vice President, Fielkow started a new career. In doing so, he displayed his love for New Orleans by running for City Council, winning and then later becoming the council’s president.

Returning to his roots, as a community leader, I am proud to team up with Alan Smason, the publisher of the Crescent City Jewish News to interview Arnie, who is now the President and CEO of the Jewish Federation of Greater New Orleans.

This FB streamed event will be an opportunity for members of the community to communicate with Arnie Fielkow, via Facebook comments. We will surely discuss his current responsibilities, his return to the city and other issues.

We will also take your questions you ask on Facebook.

Arnie Fielkow showed his romance and his connection to this city and community during the period in which he lived in Chicago heading the NBRPA.  On various occasions, he returned with the retired pro basketball players to work with inner-city young men including during the NBA All Star game week.

Now, he’s back as if he never left.

And our heart is in a better place.