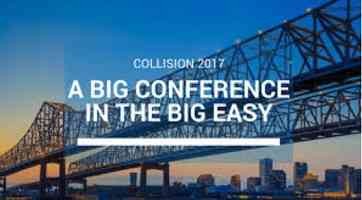 Is New Orleans area at risk of losing one of its new crown jewels of technology and business-related events, Collision?

At the end of this month, Collision, one of the fastest-growing technology shows will open its doors, expectedly, to record numbers.

Two years ago, Collision made New Orleans its new home. It was attracted to the digital revolution happening in New Orleans area and throughout Louisiana. Likewise,  the timing of the event appeared to be a “natch”.  The event was sandwiched between the first and second week of the New Orleans Jazz and Heritage Festival. Thus, attendees could stay a few days longer and soak up the rays, the best music in the world, sample the incredible food. Then they could go home to tell the rest of the world about how special was the week of technology, business and fun

In 2016, the vibes were so good, the hospitality so welcoming, the enthusiasm from the organizers from Ireland, that I thought it had the makings of the next SXSW, held in Austin.  Actually, still do.

Las Vegas had hosted Collision for one year but the fledgling event saw a better deal in New Orleans.

Strangely, today, only weeks before the doors opening at the Ernest Morial Convention Center next to the Mississippi River, Collision is hawking for a new venue.

Today, they sent out an email that said, “Should Collision move to Canada?”  This is what is says, in relevant parts:

Justin Trudeau wants us to move Collision to Canada. Should we? Let us know by voting for where Collision should take place in 2019. We appreciate your feedback.

In other news, we're taking a look at SaaS Monster. Focusing on all things SaaS, we'll share who and what we're especially excited about seeing.

Help us select an incredible new host city in Canada or the USA. Will it be Toronto, San Francisco, New Orleans, Denver, Los Angeles, Las Vegas or New York?

The email also does promote attending the upcoming 2018 show.

While I personally missed Collision last year due to scheduling issues, I did attend its maiden voyage of 2016. At that time, I wrote the trade show was one of the very best that I have ever attended. I expect this year to do better than ever.

It’s website says,” Collision is “America’s fastest growing tech conference” created by the team behind Web Summit. In four years, Collision has grown to over 25,000 attendees from 119 countries. Attendees include CEOs of both the world’s fastest growing startups and the world’s largest companies, alongside leading investors and media."

Interesintly, as I reviewed its website, I noticed that In the middle of the home page  it also urges visitors to vote on a location for 2019.

So, will Collision move to Canada or to one of the other cities it is now promoting? Don’t know. However, Bayoubuzz will update the readers with more information as to why the organization is considering the move and what New Orleans would need to do to keep it here (where it belong).

In the meantime, take a look at the event’s website, see that Al Gore will be one of the speakers and make sure to vote New Orleans.

More in this category: « With leaders like Peterson, Landrieu, no wonder Louisiana has highest anxiety Old New Orleans Times Picayune building repurposed for Driver Shack, fore! »
back to top