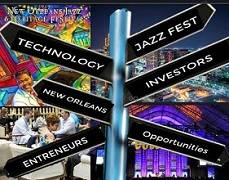 I'm JAZZED. It's that time of the year again.

Jazz Fest in New Orleans, over the past three years is where technology, business, entrepreneurship, music and food have collided thanks to a fast-growing mega-event called Collision Conference. This week, starting the second week of the world-renown New Orleans Jazz and Heritage Festival--the sights, the sounds, the tastes, the big names and the great ideas once again converge upon the place where the BIG EASY intersects with SILICON BAYOU. And for the third straight year, I have had the opportunity to engage in a video interview with the coordinator of communications for this great event, Mike Harvey. Thankfully, including his promoting Vice President Al Gore heading the star-studded stage of speakers, Harvey had much of which to be excited.

Below is the transcript of the interview conducted late last week via a Facebook Live event which was also presented on Bayoubuzz.com.

HARVEY: Well Collision is-- it's it's a tech conference, it's America's fastest growing tech conference.  It's basically a gathering of startups, investors, entrepreneurs CEO'S of big tech companies, CMO's and it's just, it's people getting together to talk about tech, to to meet each other and to listen to hopefully some great speakers, what we think of great speakers on on various stages.  It takes place at the on Tuesday through Thursday, it's a three-day event. Collision is part of the Web Summit family of events. Web summit is the is the flagship with an Irish company, we're based out of Dublin and we have events all the way around the world and Collision is sort of our web summit in America.

And so we try and pull together some really interesting contents with great speakers and hopefully people come, they're entertained, they meet the right people and we also do stuff from the evenings parties and drinks and stuff like that so we try and make it a proper real experience for attendees.

SABLUDOWSKY: Absolutely I will say this that you know of course I'm a little biased here, but, I didn't make the last year, I apologize things came up but I made every day and every night the year before and it was by far the best conferences I've ever gone to and I'm going to quite a few...

HARVEY: That's very kind of you

SABLUDOWSKY: Ok, its' very true.  so what is it that is so special about the Collision Conference opposed to other technology- business conferences?

HARVEY: Mmm, well we try very hard to make sure all the apps, the attendees have a great day.  We talk ,when we, and you know with Web Summit started as as a gathering of 400 people in Dublin in 2010 and we've tried to build conferences that allow people not just to sit on an image on a chair and listen to people and but actually to meet people so we've designed things like office hours where investors and startup meet in 15 minutes sort of speed-dating moments, mentor hours where you know senior executives from big tech companies go and actually do a 15-minute mentoring session with startups, we have what we believe is a very sophisticated conference app where you can chat with other attendees, you can seek and search out people that you want to meet and chat with, and we try and make bring a mix together of people that that come from all sides and in the tech in the tech world and deliver a great experience. It's, it's funny when obviously when people think about coming to conferences they they often say they come to see specific speakers and obviously the lineup for speakers for us and it's one of the things that I worry about a lot is making sure the line at this because is great, but people people tell us when they've been to our events the thing that they want to come back for is the connections they've made and the people they meet.   And I think that a lot of traditional conferences and a lot of, a lot of other compasses don't put enough emphasis on helping people find the right people to meet, whether they're doing it at scale or whether they're doing it in an intimate way and it's one thing we try really hard to get right.

SABLUDOWSKY: And it's really a great place for entrepreneurs for say a technology or certainly a technology-oriented company to to be in front, to get in front of people who are looking at investments and so that's one thing that really struck me

HARVEY: Just the relationship between investors and startups is the sort of the beating heart of all our events and so there are hundreds of startups who are exhibiting in booths small booths and they change every day those that those startups that come and exhibit and we have hundreds of investors many from the very biggest VC companies and LP's, Limited Partnerships in the US and around the world and obviously the startups are looking for mentorship they're looking for investment and looking to find the person who's going to help take them to the next level and investors are looking for that that diamond and the rough start up that's going to turn into the next, you know the next Lyft or the next Uber or the next the next Amazon.

So it's interesting I was looking at the list of startups that we have coming this year, it's obviously a artificial intelligence machine learning--is is a very big topics right now, lots of the startups are classifying themselves as that, there's lots of FinTech companies, lots of enterprise software companies and quite a few sustainability or environmental companies. One of the most interesting stages we think that's always at Collision now is what we call planet tech so that's a one-day stage where some of the big speakers in the world of sustainability or environment or some of the corporates that are working this area come and talk.  The probably the biggest name speaker at Collision this year is Al Gore, obviously very well known to everybody and he did actually speak at our event at Web Summit in November and basically he closed the event, he blew the doors off he really did. He's an amazing speaker, so, I'm very excited for, to listen to him he's on day one, so we're expecting expecting a packed room for him.  I should say that you know we're expecting about up to 25,000 around 25,000 folks to come through the doors over over the three days which is gonna be really exciting, is probably a little bigger than last year and and which was a little bigger than the year before, so we're really continuing to grow and obviously the N'awlins as a city venue is hugely attractive for many many reasons, so you know it's gonna be it's gonna be a great week

SABLUDOWSKY: Plus it's beginning of Jazz Fest, so I should say it's actually between week one and week two--so yeah so those people who are say considering attending I mean it's a great opportunity to do tech and do music and food

HARVEY: Yes and we very deliberately position ourselves obviously working with the Convention Center and and and the city authority, we positioned ourselves in the middle of that Jazz Fest week cause as we could see that there's there's some overlap.  We have a music stage which we call music notes at Collision, I think it takes place on day three and you know it's a very big music artists come and come and take part on that stage. Wyclef Jean is it's coming to speak this year at Collision and several other big names are coming up very much looking forward to listening to him too - so yeah, I mean music oddly enough but it's the heart of the experience for everybody who comes to New Orleans and will be reflecting that on stage too.

More in this category: « Port of New Orleans honors top 10 shippers, ocean carriers for its success Collision Conference New Orleans, now Toronto: Stabs heart, not back »
back to top