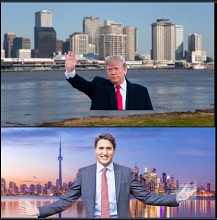 Honestly, I felt knifed in the heart; Not in the back.

Which describes my emotions while listening to Paddy Cosgrave, the founder and CEO of Collision Conference.  At a press conference yesterday, the young international businessman explained his reasons for moving his fantastic technology-entrepreneurship-industry event from New Orleans to Toronto, and from the United States to Canada.

Two years ago, when Cosgrave, who is from Ireland, first brought his conference to the city, I equated it with SXSW, the ever-so-successful technology super festival in Austin Texas. I felt certain that New Orleans would be Collision’s permanent home. I believed that the city and the region would brand Collision along with our world-renown Jazz and Heritage Festival as the place all-things technology, venture capital, ideas and entertainment.  Collision has been taking place during the second week of Jazz Fest.

I had my own special reason for Collision taking root here.

During the nineties, I was the technology columnist for the Baton Rouge Business Report, wrote various tech articles for the New Orleans Times Picayune and had a one minute daily on WGSO Radio. The topic was technology.  I also taught E-Commerce at Tulane and Loyola Universities, formed two technology-based organizations in Louisiana and taught other attorneys Internet and Internet law.  Perhaps one of my real personal missions was giving birth to the Digital Media Law concept, an idea patterned after the film tax credits, that I hoped would jump-start the local tech industry.

I often wrote and discussed how behind we were compared to other communities nationally and worldwide.   In other areas, investors were throwing money at the gusher of technology companies. Louisiana, by contrast, resided in a dry gulch. The Digital Media Concept was tax incentive legislation. Somehow, we needed to attract young, technology-oriented minds from around the world.  The legislation became law in 2005 and then the Jindal administration and legislature greatly expanded it years later.  Once the tax incentives were in place, the State of Louisiana, GNO Inc, BRAC from Baton Rouge and other economic development organizations used the law to attract some heavy hitters in the world of video games, apps and media.

So hopefully you can understand my excitement to see what appeared to be a dynamic international technology conference bringing in innovative startups, major Internet companies, well-known investors to New Orleans.  Thanks to Michael Hecht of GNO Inc and entrepreneurs such as Chris Schultz, it appeared to me that Collision would draw the type of talent we needed into the region.

Thus, the reason my heart aches. A major opportunity to help feed a dream, vanished.  But why should I not feel stabbed in the back?  The answer is very simple.  Cosgrave and Collision had to do what was best for the company and the reasons given at a press conference simply made sense. I don’t like the impact, but, again, it makes common sense viewing it from his perspective

Collison Conference appears to have doubled in size since it opened its doors in 2016. The attendance of 11,000 grew the next year to roughly 19,000 and organizers expect an anticipated 25,000 this week.  Unquestionably, those are terrific numbers and all involved deserve tremendous credit for the achievements.  There also is no doubt in my mind that with the Jazz Festival bringing in hundreds of thousands of people annually, the city easily could not only help grow the conference but handle the growth as we have done for other major conventions and attractions.

At the press conference, Cosgrave explained his reasons for the move to Toronto:

He said that Toronto has overtaken Silicon Valley for the first time last year for technology recruitment.  Cosgrave said there's a huge number of Silicon Valley companies with engineering offices in Toronto. There is technology employment of over 400,000 people (which he implied was equal to New Orleans’s entire population).

The intervention of Prime Minister Trudeau has personally intervened and has filmed a “Welcome to Canada” video for Collision as part of the announced move.

Direct flights. Toronto is a hub. New Orleans over the past eight years has grown its international flight connections and frequencies with more direct connections from Europe and Central America. The city is also expanding its airport.  However, the speed of growth is not fast enough. In the nineties, New Orleans lost a big-named convention, the National Television Producers (NAPTE). The cited reason for pulling up stakes? The lack of direct flights and now, unfortunately, another high-profile conference is claiming this problem as a deterrence to growth.

Despite the growth of the technology industry due to many reasons including the Digital Media Law, this region cannot compare to others such as Toronto, New York, Boston, Silicon Valley in terms of attracting young entrepreneurs. Those are the very people who buy space at the expo and buy tickets to attend.

Indeed, the reasons he cited were quite impressive. During the press conference, I asked Cosgrave if Louisiana and New Orleans did anything wrong and what could we do to improve the opportunities.  He was emphatic that Collision never could have grown to its current status without the help coming from Hecht, Schultz, the New Orleans Mayor Mitch Landrieu and many others.

Then someone asked another question which was a stunner with serious economic consequences for this region and for the country:

Cosgrave said, “I can't speak to specifics but over the last number of years we have attendees at Web Summit, for example, from literally all over the world, from all sorts of countries and unfortunately some of those attendees have not been able to come to Collision and it really started to impact last year”.   He said that “that’s important to us the great entrepreneurs, great engineers, thousands of people from all over the world should be, we hope, to come to a conference like this.  I can't, I have no idea how many more, the extent to which it was a “chilling effect” that many of our attendees from certain countries around the world just opted out of even applying for a visa. Unfortunate so that that's meaningful to us”.

Cosgrave did not mention President Donald Trump or his administration by name. It was clear then and later with private conversations I had with top member of his team that Trumpism was having some kind disturbing impact and on at least this specific business and this specific industry.

It is very difficult to deny that this trend makes sense.

The technology world knows few borders.  It’s infrastructure is based upon communicating with one another via chat, video, voip, email—you name it.  Businesses, large and small, in Lafayette and Baton Rouge Louisiana are doing business with entities and individuals in Vietnam, Nepal, Chile and throughout Africa. Cosgrave noted that fifty percent of Toronto’s population has immediate roots from countries throughout the world.  A convention such as Collision thrives on young (and not so young) entrepreneurs and investors who are opened to new ideas and who welcome talent regardless as to the place of origin, religion and beliefs.

For the most part, throughout our history, America has been known as an open country, not a closed one.  I’m not referring to the issue of illegal immigration here. I’m talking about our country opening our arms to those notwithstanding of origin.  Unfortunately, that has changed. We have debated banning all Muslims. We are threatening tariffs.  Our country is sending signals, intended or not, to the rest of the world that America does not want to deal with A-Hole countries and others.

According to international tourism reports, the United States has lost its competitive edge, in part due to Trump and in part to other reasons such as the exchange rate.

NBC News reports that “Travel to the U.S. has been on the decline ever since President Donald Trump took office, and new data from the Commerce Department shows the slump translates to a cost of $4.6 billion in lost spending and 40,000 jobs, according to an analysis by the U.S. Travel Association.

The latest data shows a 3.3 percent drop in travel spending and a 4 percent decline in inbound travel.”

Indeed, New Orleans and the State of Louisiana lost a big one, not because we did not do a great job, but because of perceived greater opportunities for a growing major player to find a home elsewhere. Yes, it hurts. Perhaps more importantly, however, the United States also lost an opportunity. Technologists generally are very open, sharing, welcoming and expressive sorts. Whatever the importance of diversity, at least one Irish businessman apparently felt more at home with the likes of Justin Trudeau of Canada and the City of Toronto than he did here in the United States. His bread and butter depends upon good will among people in a wide-open environment.

Obviously, Cosgrave and Collision feel that Toronto had a more established business climate, technology-based education culture and infrastructure, much larger population pool of which to draw attendees who possess specific interests. No doubt, direct-connection air travel plays a large role as it has done now for decades.

But within the ganglion of reasons, there appears to be poorly articulated concerns that United States is a big turnoff to important customers hailing from other countries and cultures who can place their business money elsewhere.  In short, it is obvious to me that they see Trudeau and Canada having their backs.

Unfortunately, there is a price to pay when international business people find greener pastures and more-opened arms.  It hurts emotionally. And it sure does not help with your dreams.