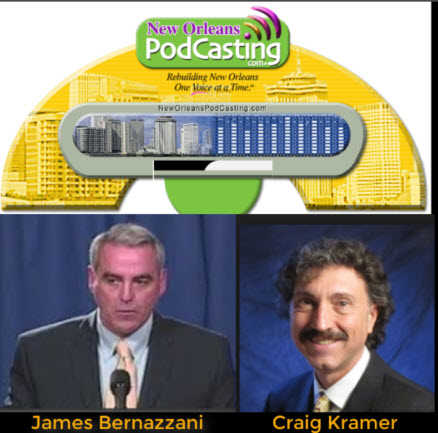 How does this revolution in political thought impact those who have been on the front line for the FBI? Recently, Craig Kramer, the founder of NewOrleansPodcasting discussed some of these issues with former Chief of the Federal Bureau of Investigations James Bernazzani.

Bernazzani has been a very high-profiled figure in the New Orleans region which also has been a hot-bed of corruption.  After a very active stint, helping to bring prosecutions of various elected officials to justice, he retired from the service.

Below is a short introduction by Craig Kramer and select quotes from Bernazzani about the Russian threat.  Here is the link to the entire Bernazzani podcast:

I started NewOrleansPodcasting in January of 2006. My wish was to help people and businesses share positive stories about the New Orleans recovery after Hurricane Katrina. Eventually, my focus shifted to include general positive stories that were not related to Katrina, but were still centered around New Orleans. As years went by, I found that in addition to my enduring interest in my native city of New Orleans, I was becoming more and more passionate about issues on the national front. From time to time, I broke away from my local theme and did an interview about a national issue, as I just did with former FBI agent, James Bernazzani.

As my interest in national issues grew, I realized I had a decision to make. Should I start a second podcast focused on national issues or confine myself exclusively to local topics with NewOrleansPodcasting?

I decided that the solution was to start a second podcast site that focuses on such universal issues as National Security, Politics, Religion/Morality and Social Justice.

These podcasts would explore many of the "taboo" topics that people are cautioned to avoid talking about about with friends and family.

My goal is to encourage people to think beyond their comfort zones. I want to encourage people to recognize their biases and challenge themselves to extend their thinking to consider different points of view. Incidentally, I do not see "bias" automatically as a negative word. We all go through the day with our preconceived ideas; they help us survive. However, when our biases get in the way of critical thinking, those biases become chains that shackle us and hinder our growth and development.

I hope to launch the new nationally-focused podcast site next month, and I will also continue to explore local topics on NewOrleansPodcasting.com.

"What President Putin is doing right now is administering a very effective Active Measure. An Active Measure basically is a dirty trick used by the intelligence community. And the Active Measure is based upon mistruths and misrepresentation designed to fracture the societal community of the United States and it’s working.”

“Early on when you heard about, “Lock Hillary Up”, that was part of that Active Measure that was born by the Russians, sent to the appropriate political establishments who irrigated the fields for the Russians…”

"This is more brains over brawn as opposed to the old Cold War, brawn over brains. This is not bullets and bombs. This is information warfare. This is gigabytes and the Internet and we have to outsmart Putin and his cronies . . ."

“I think his (Putin) main objective, right now … while fracturing the American society…he’s going to fracture probably the strongest and most historically sound alliance...NATO".

"I’ll tell you right now. If you don’t understand the difference between politics and national security, you’re going to be Putin’s best customer. Pull yourself out of your Republican mindset, pull yourself out of the Democratic mindset, that independent mindset, and put yourself in the American mindset. We are all in this together. If we can’t extract ourselves from politics and understand this is a legitimate, black operation and attack on United States values, then Putin wins and we lose.”