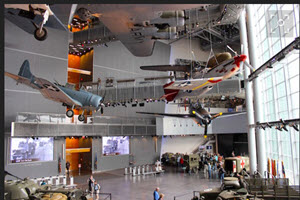 As Labor Day approaches, Monday, and if you are a Louisiana resident, why not start the month of September 2018 off with a family outing--at The National WWII Museum in New Orleans.

Here is a press release from one of the greatest museums in the world:

The National WWII Museum is again showing its appreciation to local supporters by offering discounted admission to Louisiana residents. For the fourth consecutive year — during the entire month of September — locals will have the opportunity to enjoy the Museum’s exhibits and galleries for only half the price of a regular Museum Campus Pass.

As one of the premier tourist destinations in the world, the Museum currently spans five pavilions featuring several permanent exhibits, which now tell the complete story of America’s road to war and the fight to secure freedom overseas. Permanent exhibits include The Arsenal of Democracy: The Herman and George R. Brown Salute to theHome Front, Richard C. Adkerson & Freeport-McMoRan Foundation Road to Tokyo: Pacific Theater Galleries, The Duchossois Family Road to Berlin: European Theater Galleries and the institution’s original exhibit The D-Day Invasion of Normandy, which recently reopened to the public after undergoing renovations.

With half-price admission, Louisiana residents will also have the opportunity to view the Museum’s latest special exhibitSo Ready for Laughter: The Legacy of Bob Hope. Supported by the Bob & Dolores Hope Foundation and with special thanks to the World Golf Hall of Fame & Museum, So Ready for Laughter tells the story of the entertainer’s unique place in WWII history and beyond. Using multimedia elements and captivating storytelling—including artifacts, films, rare photographs and an interactive display—the exhibit highlights how Hope helped lift the human spirit during one of the darkest times in American history.

In order to receive the September discount, residents must present a valid Louisiana driver’s license at the Museum’s ticket counter. For an additional $7, visitors can also choose to include “Beyond All Boundaries,” a 4D journey through World War II, or Final Mission: The USS Tang Submarine Experience with their admission. The discount — which is only available for walk-up purchases — also applies to group sales, but there is a limit of four admissions per guest. Other discounts cannot be used in combination with the promotion.

The National WWII Museum tells the story of the American experience in the war that changed the world—why it was fought, how it was won, and what it means today—so that future generations will know the price of freedom and be inspired by what they learn. Dedicated in 2000 as The National D-Day Museum and now designated by Congress as America’s National WWII Museum, it celebrates the American spirit, the teamwork, optimism, courage and sacrifices of the men and women who fought on the battlefront and served on the Home Front. The 2017 TripAdvisor Travelers’ Choice Awards ranks the Museum No. 2 in the world and No. 2 in the nation. For more information, call 877-813-3329 or 504-528-1944 or visit nationalww2museum.org.

More in this category: « New Orleans crime scenes are frequent city landmarks with shootings Bagged over New Orleans Saints loss, but on Kentucky cloud 9 »
back to top