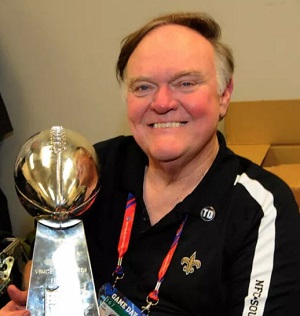 When you hear players and coaches say it takes individuals to make a team, you probably think they are talking about the various personalities who man critical playing positions.But those who are fortunate enough to be around a professional sports franchise know that many anonymous individuals help make up the team. Like Glennon “Silky” Powell, the Saints long-time assistant equipment manager who died last week a few days before his 72nd birthday.

A fixture in the Saints' locker room for 38 years, until his retirement in 2012, Powell was as much a part of the Saints’ franchise as the fleur-de-lis on the helmets. To describe the role of an equipment manager in pro sports is not easy. Let’s just say it’s like a coal shoveler in the engine room of a luxurious ocean-going vessel. It sounds glamorous until squalls hit and the temperature rises. And the temperature in a football locker room rises and falls depending on the previous week’s game, mood swings of players and coaches and seemingly innocuous tasks as players’ ticket orders.
But with each wave of new players, always younger than those before, equipment managers and team trainers assume a mantle of respect. They are the adults in the room, playing different roles ranging from disciplinarian to father confessor and even friend. Friends of Silky Powell are grieving this week, but each one is handling it with stories and memories that reflected the joy that the ever-smiling Silky brought to the locker room. Archie Manning told me of a time when he was rehabbing from bicep surgery and Silky was drafted by trainer Dean Kleinschmidt to play catch with the quarterback. “I started with five-yard throws to Silk and he would throw it back,” Manning said. “By the time I had built up to 20 yards, Silk developed bicep tendinitis in his arm.”
Sometimes, tasks that appeared to be simple required prior knowledge and experience. Powell and Simmons were responsible for collecting ticket orders from players the week of a home game. When a prominent player’s order was turned in as “2-2-2-2,” they knew the order was for four pairs, strategically placed in different sections of the Superdome. But when a part-timer was assigned to take the order before one game, he read “2-2-2-2” as eight tickets together in the same row and submitted it to the ticket office. Minutes before the game, the angry player confronted the equipment guys, claiming his order had been screwed up, and his life was in danger. Silky and Dan would have known that the player’s “2-2-2-2” order was for two tickets each for four girl friends, each to sit in different sections.
Powell was a son of the Irish Channel, and an athlete himself in his younger days at Redemptorist High School. One childhood friend told me about Silky’s skill as a baseball player, saying “you may not believe it, but I’ve never seen such a beautiful hook slide into second base as Silky’s.” Silky also was known to hold his own in pickup basketball games around the old practice facility off David Drive. If Silky had an enemy, it was his weight that seemed to rise and recede like a storm tide. Once, when Silky’s girth approached alarming proportions, President and General Manager Jim Finks offered him $1,000 if he would lose 100 pounds. Silky made an effort, but after a while he thanked Finks and told him he’d rather continue living large.
Glennon Powell was given the nickname “Silky” by family members who likened him to a prominent racehorse named Silky Sullivan. The thoroughbred’s reputation was as one that started slowly but finished near or at the front of most of his races, just like Silky’s place in the hearts of those who knew him.
A memorial service will be held on Saturday, October 20, at the L.A. Muhleisen Funeral Home, 2607 Williams Boulevard, in Kenner.
---
My new book, "Integrated: the Lincoln Institute, Basketball and a Vanished Tradition" is now available from the University Press of Kentucky or at Amazon.com.
Visit Jim Miller's website
Read 2112 times
Tweet
Tweet
Published in New Orleans News
Tagged under

More in this category: « Hall of Famer, Drew Brees and the man who drafted him New Orleans, a top worldwide winter wonderland for tourists »
back to top